Into the Worlds Part I: Searching for Olympus in Manhattan

So I know you're all dying to hear about my trip to the East Coast last month.

Oh, you didn't know? Well, I think it's appropriate for this blog, as it was very literary-heavy. But before we get started, announcements.

J.K. Rowling Is About to Release 3 New Harry Potter Books

Don't get too excited: I'm not sure they're actually "Harry Potter" books. But, do get pretty excited, because they're about Hogwarts.

Now that we've got that out of the way, it's time for another Percy Jackson-related post! (Come on, it's been, like, what, three months since the last one?)

Into the Worlds Part I: Searching for Olympus in Manhattan 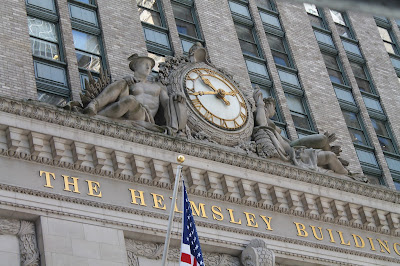 We (my family and I) spent the first part of our trip in Manhattan. One of the first things Anna did upon arriving was walk into the NY Yankees store and buy a baseball cap.

In the Percy Jackson universe, Manhattan is supposed to be the place where the old gods and goddesses of Ancient Greece take up their residence in the modern world. While I'm sorry to say I didn't actually see any live Greek gods or goddesses (I mean, I might have, I just didn't know it), I quickly came to the conclusion that if there's one place in the modern world that the old gods have come back to, it's definitely Manhattan. Not only is it the cultural hub of the modern world, there are allusions to the Greek gods all over the place. For a prime example, check out the statue on the Helmsley Building above (honestly, I have no idea what the Helmsley Building is, I just saw Hermes and took a picture). Looks like Hermes and probably Demeter, with her trademark wheat in tow.

Or take a look at this mural on the ceiling of the New York Public Library: 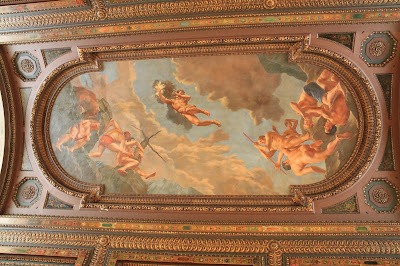 It's Prometheus bringing fire to mortals (for which he was afterward punished by being chained to a rock and having his liver eaten out every day by a giant eagle, but you know, whatever). I thought this was such a cool mural to have in the New York Public Library! Prometheus' fire represents the spark of knowledge, the flame of creation, the bringing of light into the world.

Flanking the library on either side were two fountains with statues of what look like Aphrodite and a Greek philosopher. 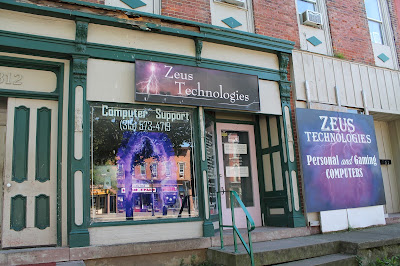 I'm pretty sure this is a front for Zeus's center of operations in upstate New York.


And yes, I did visit the Empire State Building. 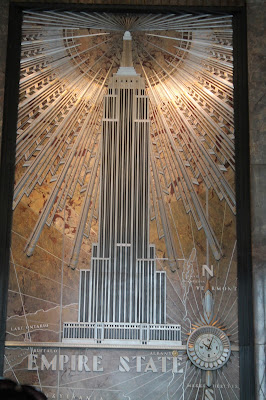 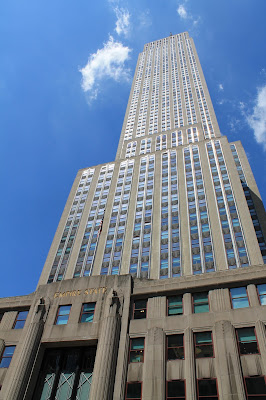 So I could care less that the Empire State Building is an excellent example of whatever architectural style it is, and that it was the tallest building in the world when it was constructed, and a monument to modern society and all that - I just wanted to visit the gateway to Mount Olympus!

Unfortunately, we didn't actually find Olympus, but that proves nothing! As every demigod knows, you can't get into Mount Olympus if the gods don't want you to. We did, however, find an elevator and snap this picture of Anna[beth] in her Yankees cap: 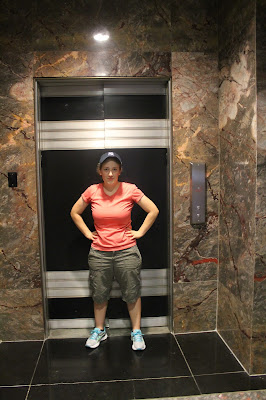 Tune in next time for the story of my literary rambles around New England. 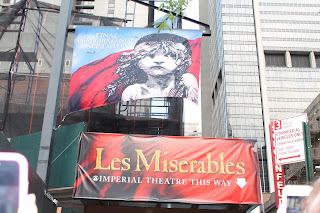 Oh yeah, this happened too. The show closes its Broadway run on September 4, so I feel extremely lucky to have seen it. 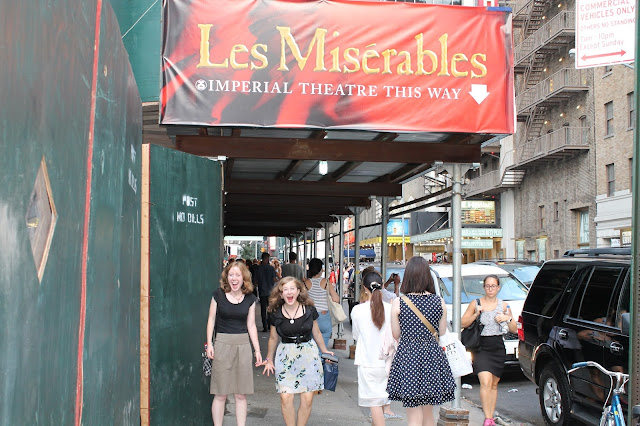 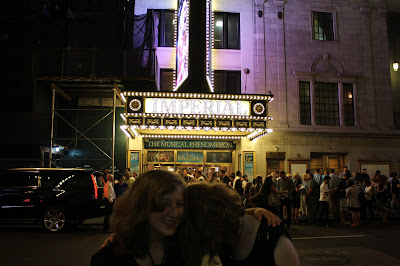 Some of you muggles may know that Harry Potter's birthday was the 31st of July. Some of you may have even celebrated it. But I bet none of you celebrated it by drinking Butterbeer in a tent. 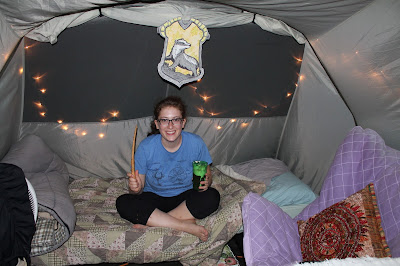 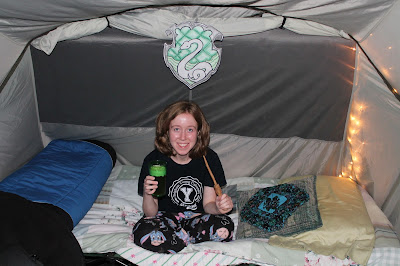 And if you're wondering if drinking Butterbeer in a tent is actually fun - it is.

But that's not all we did. 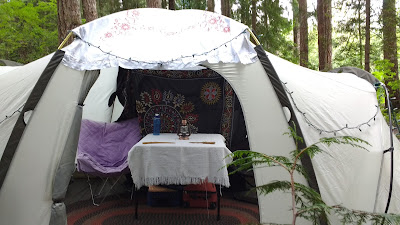 We "glamped" up our tent to make it a little more like the Weasley's tent that Harry, Ron, and Hermione camp in while hunting for horcruxes. This included putting a braided rug on the floor, setting up a table, and hanging a tapestry in the back. 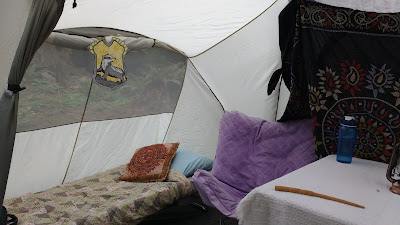 We also set up cots with sheets, comforters, and pillows, and brought two comfy chairs to put next to the table. 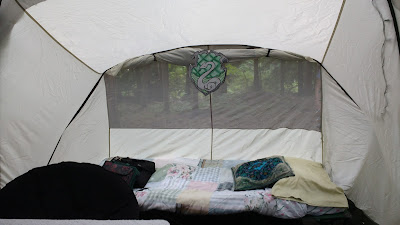 Anna designed crests based on our Hogwarts houses to hang over our beds. 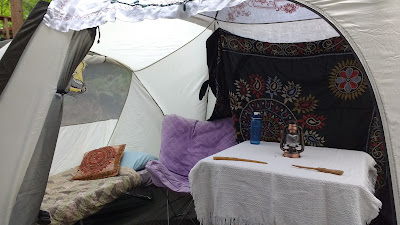 Those wands are custom-made following the specifications of our wands on Pottermore, and yes, we carved them ourselves. 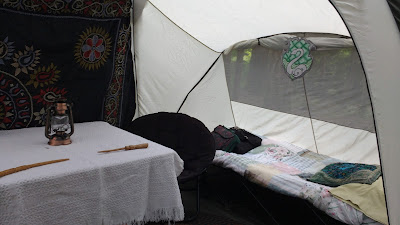 The best part? OK, probably the Butterbeer actually, but the next best part - setting up a laptop on the table and watching a Harry Potter movie every night in our tent. We also strung Christmas lights over the tent for a cozy and extra magical effect at night.

For those of you interested in brewing your own Butterbeer, here's the recipe. I've tried making several Butterbeer-like concoctions over the years, and I can honestly say this is the best (the other recipes I tried don't even come close - they were sickening), and it's pretty easy to make (also non-alcoholic). The recipe calls for root beer, but we used cream soda. Take your pick.

FOR THE CREME TOPPING

I guess you could say we're pretty big nerds.

*Recipe from Tina Dawson, Love is in my Tummy, http://www.loveisinmytummy.com/2016/05/5-ingredient-non-alcoholic-butterbeer.html
Posted by Erin at 3:50 PM No comments:

Email ThisBlogThis!Share to TwitterShare to FacebookShare to Pinterest
Labels: Butterbeer, Harry Potter
Newer Posts Older Posts Home
Subscribe to: Posts (Atom)
WE ARE CURRENTLY TAKING A HIATUS FROM NEW AUTHOR REQUESTS. PLEASE ONLY REACH OUT IF WE'VE REVIEWED FOR YOU BEFORE.