A spunky heroine, a cursed sword, and a lost knight: Rob Keeley's The Sword of the Spirit 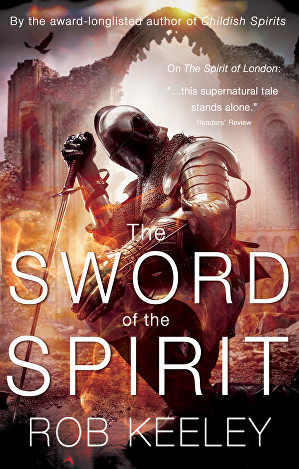 Following the success of his award-longlisted Childish Spirits and its sequel The Spirit of London, prolific children’s author Rob Keeley is back with The Sword of the Spirit, the third instalment in his thrilling and suspenseful Spirits series.
“There are truths which must be revealed before the battle may commence. You do not yet know the meaning of the sword.”
Ellie’s investigations into the spirit world have reached a medieval castle, where archaeologists are digging for the fabled Sword of St Merrell. But she didn’t expect to meet a real medieval knight. Nor was she expecting him to be an ancestor of Edward Fitzberranger. Ellie discovers that behind a legend of chivalry and bravery lies a dark and nasty truth. And worse is to come. Ellie’s meddling has consequences she could never have foreseen. This time, she may have gone too far...

The third novel in Rob Keeley's Spirits series is just as mesmerizing, just as suspenseful, and just as much fun as the first two. At this point, did I expect anything less? Of course not.
Ellie has a new ghostly mystery on her hands: a cursed sword, a knight who's traveled forward in time, and an enigmatic woman telling her not to meddle in what she doesn't understand. Not that Ellie has ever listened to warnings like that in the past. Now, it's up to her to solve the mystery and return the knight to his own time period before the curse destroys everything.
As usual, the narrative voice is charming. It makes me feel like I've snuggled up on the couch with a warm blanket and a cup of tea. The good characters feel like friends, while the villains are spooky and/or intriguing. Edward makes a brief appearance, and of course Ellie's mom and brother are still here, as is Marcus. But we're also introduced to new characters, like Sir Francis the knight, who are delightful and fun, if not quite as endearing as the mischievous Edward (I love him and will accept no substitute.)
The mystery is riveting, and the action perfectly paced. Just as in the first two novels, I was eager to find out how all the threads connected, who was really guilty and who was really innocent, and how Ellie would solve this latest puzzle. Speaking of which, Ellie is just so fantastic.
She's a preteen English girl whose pastimes include painting, writing poetry, and befriending spirits in need. She's adventurous, always up for anything, and indisputably good. She cares about people and her role as a protector and helper of spirits is so cool!
Without spoiling the ending, I loved how fearless and decisive she was at the climax. (It involves wielding a cursed sword before a demon.)
So yeah. Ellie is awesome. This series is awesome. Rob Keeley is awesome. If you want a supernatural story with a mildly creepy vibe and a spunky, heroic in her own way main character, get yourself over to Amazon and buy all the Spirits books.
The Sword of the Spirit could stand alone, as it contains its own story without relying too much on the previous books, but I don't know why you'd want to rob yourself of the marvelous and adorable first novel Childish Spirits.
I'm sure Ellie will get into plenty more trouble in the next two books, and I am here for it.

Until tomorrow.
Posted by Erin at 4:49 PM No comments:

Email ThisBlogThis!Share to TwitterShare to FacebookShare to Pinterest
Labels: Book Review, Fantasy, Ghosts, MG
Newer Posts Older Posts Home
Subscribe to: Posts (Atom)
WE ARE CURRENTLY TAKING A HIATUS FROM NEW AUTHOR REQUESTS. PLEASE ONLY REACH OUT IF WE'VE REVIEWED FOR YOU BEFORE.