23 Books That Changed My Life

This week I'm turning 23, and decided that as part of my birthday celebration I would look back and see if I could list 23 books that had changed my life. NEVER TRY TO DO THIS. It was impossible. First, I had to decide to get rid of religious texts (The Bible, The Book of Mormon, etc.) - yes they've changed my life, but I wanted to do more secular books. Second I decided that only chapter books would make the list. Third, I realized not all the books that have shaped me would fit on the list. Fourth, I thought about ditching the whole thing. Fifth, I decided series would count as one book. Sixth, I realized these would not be my most favorite, or the ones that changed me the most, just some. Seventh, my computer rebooted. Eighth, some of them have reasons, some don't. Ninth, it is what it is. So, I hope you enjoy 23 books/series that really influenced me.


(In no order whatsoever. Really though, don't ask me to order them.)
bold = series     normal = single book

4. The Chronicles of Narnia - C.S. Lewis

8. Nightcrawler, Volume 2: Reborn - Chris Clairemont
- This may seem like a strange choice, but this comic volume was surprisingly deep and thought provoking. Also I may have cried.

12. Pure Dead Magic - Debi Gliori
- This is one of my most favorite books to re-read. It never gets old. It's funny, it's weird, and it's fantastic. It helped me to understand that a weird sense of humor isn't a bad thing, you just have to find the right people, and that keeping your living great-great-great-great-great-great-grandmother in your freezer is perfectly acceptable.

13.The Dark is Rising - Susan Cooper

15. Captain America: White - Jeph Loeb
- I actually wrote a previous blog article about this one - Cap and Bucky: A Love Story

16. Defiance - C.J. Redwine
- I read this book at a time when I was dealing with extreme chronic anxiety, and one of the main characters reacted to things and thought about things the exact same way I did, and he still managed to save everyone and function, for me this was a wonderful revelation, even if it was fiction.

18. A Long, Long Sleep - Anna Sheehan
- In this retelling of Sleeping Beauty, the "princess" is not the girl sleeping waiting to be rescued, but the resilient briars that grow around the castle keeping everyone out, and the princess safe. You can be your own hero.

20. Macbeth - William Shakespeare
- While reading this play in school I actually laughed out-loud at several points (this is not a comedy). My classmates found it odd. I love this play, and find it hilarious which further notified me of my sometimes dark sense of humor.

23. Through the Looking Glass - Lewis Carroll

So, there you have it. I would love to hear your thoughts and comments!
Posted by Anna at 11:00 PM 3 comments: 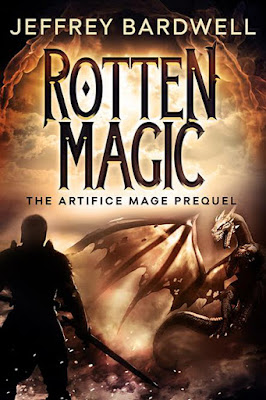 Devin will do anything to win. Even resort to magic!Devin competes to become the best artificer in the mage phobic Iron Empire. Who needs magic when you can master the art of machinery? The other apprentices envy his genius and skills . . . especially Benson. Every apprentice hones their craft building and fighting in crude prototypes of powered armor. Some add frills, others barbs or horns. When Devin transforms himself into a mechanical dragon to slaughter the competition, Benson steps into the role of dragon slayer.But Devin harbors a secret as he claws his way to the top of the Artificer's Guild: he's a mage. These new abilities are thrilling and frightening, and the voices more so. How long can Devin be content wearing a steel dragon mask when the seductive promise of true arcane power whispers in his ear?Experience the novella prequel to the Artifice Mage Saga: a fantasy steampunk brawl of metal vs. magic where sorcery is bloody, science is greasy, and nobody's hands are clean.

If you're looking for a book that reads like a steampunk version of Ender's Game with magic and an element of dragons - look no further. You're currently reading a review of that book. A slim novella packed with punches, Jeffrey Bardwell's Rotten Magic starts off the Artifice Mage Saga with a bang (several, in fact). Setting and characters are intriguing, relationships are complex, ambition is powerful, and magic is dangerous.

Devin is an intriguing character because he doesn't fit nicely into the young underdog genius mold. At first, he seems to: a young, intelligent apprentice working on a secret project, regularly taking the brunt from the school bullies.

But as things go on, we realize that's not Devin at all. He is intelligent, but his secret project isn't all that original, and he can't even seem to get it to work when he tries to present it at his examination.

He does often take the brunt from the school bullies, but that's only because he seems to enjoy fighting and has accepted the rule that the dragon always loses. And he prefers to play as the dragon. Far from just an innocent young victim, Devin longs for retribution and it looks like he's going to get it. He can be savage when crossed, and even his family and friends aren't always safe.

Rather than some young genius who's probably going to save the world with his invention, Devin is a frustrated apprentice who has big ideas that never seem to get off the ground, and he may very well end up destroying the world, rather than saving it. That makes him less of an idealized fantasy hero and more of a, well, human. But one with a dark side that makes him all the more compelling.

Devin's nemesis, Benson, doesn't fit the common character mold either. He's a bully - but as Devin points out, he's not just your average bully with no brain but plenty of brawn. Benson is intelligent as well, and that's mainly why Devin is having such a hard time taking him down.

But back to Devin himself. He becomes even more intriguing as a character when we hear the voices inside his head (yes, everyone has those voices, but Devin's seem to be more vocal than most of ours are). In Devin's thoughts, the voice of the artificer and the voice of the mage are always in conflict. Like the gas lamp he accidentally blows up in his room, Devin is poised to explode at any moment, and when he does, the consequences will be dire. (But you might just have to read the next book to find out how dire.)

Told in an engaging style with suspense, wry humor, and a strong undercurrent of magic, Rotten Magic is a thrilling roller coaster of a ride up to the top - where I expect we can catch the next book and set off on an even more thrilling journey. Bring it on!

Henry and the Hidden Treasure by B.C.R. Fegan 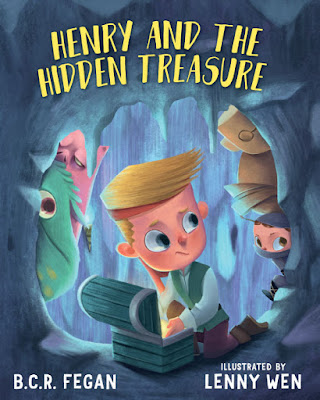 "Henry has a lot of treasure and he keeps it very well hidden."

So well hidden, in fact, that there's no way in heck anyone is getting to that treasure. 'Cause Henry's got a slew of incredibly strong, incredibly scary creatures guarding it, including but not limited to a fire-breathing dragon, gigantic robot, several superheros, and a giant and ferocious pink pig. (I don't know about you, but that pig looks more ferocious than the superheros, dragon, and robot combined).

Not content to leave it to these guys, Henry has also hidden his treasure in the darkest part of a secret cave and surrounded it with booby traps. If some brave soul succeeds in making it past all of Henry's defenses, they'll still have to get past Henry himself: a swashbuckling kid with a powerful laser gun that's almost as big as his imagination (but not quite).

But, against all odds, it looks like Henry's little sister Lucy (secretly a ninja) may have found a way to break through all of Henry's defenses and reach his secret treasure!

On second thought, it looks like Lucy's not interested in Henry's treasure at all. In fact, she may have something much more drastic in mind....

Henry and the Hidden Treasure is a charming story told with creativity and heart. I loved Henry's wild imagination and all his painstaking precautions in guarding his treasure. The various layers of security (monstrous guards, a huge maze, booby traps, etc.) are sure to appeal to kids with big imaginations.

Likewise, the sweetness (literally and figuratively) of the story's ending will hit home for brothers and sisters (or maybe mostly just for parents who wish their kids got along a little better).

To top it all off, Lenny Wen's delightful, fun illustrations complement the story beautifully: seamlessly mingling the world of Henry's imagination with the "real" world and things as they actually are (a.k.a., the secret cave is his bedroom).

All in all, this is a delightful little story sure to make you grin, awake your imagination, and finally make you go "awwww" because it's just so darn cute.

Email ThisBlogThis!Share to TwitterShare to FacebookShare to Pinterest
Labels: Book Review, Children, Picture Book
Newer Posts Older Posts Home
Subscribe to: Posts (Atom)
WE ARE CURRENTLY TAKING A HIATUS FROM NEW AUTHOR REQUESTS. PLEASE ONLY REACH OUT IF WE'VE REVIEWED FOR YOU BEFORE.