So you think you can dance? You obviously haven't seen Newsies. 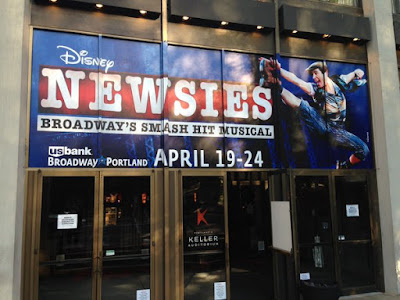 
Right now I feel like Katherine Plumber - the young reporter and heroine of Newsies; I can't figure out how to begin this review. So let's just start with what I'll inevitably end up talking about anyway: the insane dancing in Newsies.

The dance numbers are the Newsies trademark and without a doubt the most incredible part of the show. When you go to see Newsies you go to see News Boys performing crazy dance routines - and you're not disappointed. The best dance numbers are featured in the songs "Carrying the Banner," "Seize the Day," and "King of New York." My favorite is the "Seize the Day" dance break, which, by the way, you can (sort of partly in a very simplified version) learn to do yourself by watching the tutorial video on the Newsies website.

If you're not sure what I mean by insane dancing, imagine a bunch of guys doing back-flips, sustained pirouettes, mid-air splits, spinning on newspapers, tap-dancing on tables with spoons, basically any and every incredible dance move you can imagine but didn't think was possible for mere mortals to perform - and then picture the Newsies doing it: 'cause they do.

Then picture them doing it in turn of the 19th century New York dress, and picture all of them as really good looking. That's Newsies.

Oh yeah, and they also sing.


I saw Joey Barreiro as Jack Kelly (the star of the show) and he was amazing - at his curtain call the applause rose ten decibels and everyone in the audience gave him a standing ovation. Of course he was a great dancer, and he played Jack Kelly with all the charisma, inner turmoil, and passion that the character demands. Also he had this small talent called being able to sing - really sing. When he belted "Santa Fe" (his big solo) from the rooftop, it was perfect.


I also LOVED Zachary Sayle as Crutchie, Jack's best friend and brother in all but blood. I actually think Sayle might have been the best actor in the cast, and that's including all the "adult" cast members. His "Letter from the Refuge" song was perfect - with just the right blend of understated suffering and wry humor that the scene requires.

Davey was played by understudy Daniel Switzer, who apparently usually plays Race. Switzer did a fairly good job, but I wasn't crazy about him, and Davey is usually my favorite character. Part of that could have been the writing, though; I felt like Davey's character wasn't as fleshed out as it could have been, and he wasn't really allowed enough of a character arc throughout the show. As a point of comparison, in the Newsies movie (1992), Davey's character undergoes a dynamic transformation from the smart but timid and responsible oldest son to the fearless strike leader who has the guts to put his own words across instead of letting Jack speak them for him. I am definitely not suggesting that the musical should have been more like the movie; I'm just saying I would have liked a little more Davey.

The musical focused a lot on Jack's inner struggle to do the right thing for the Newsies, and that's great; but I felt like a couple of the main supporting characters had to take a step down and become less interesting so Jack could have the spotlight the whole time.


And then there's Katherine Plumber, the show's heroine and Jack's romantic interest. I'm sure it's a fantastic role when played well, but I couldn't get behind Morgan Keene as Katherine; and I don't think it was just jealousy over the fact that she was surrounded by Newsies all the time. Her singing voice was great, but her acting style and speaking voice kind of drove me nuts. She was too whiny, I think, and most of the time she spoke in a sardonic tone of voice that I found irritating. At the very least, I wasn't convinced she was a match for the indomitable and dynamic Jack Kelly.


Everyone else in the cast was fine. Of course all the Newsies were great, Anthony Zaas was hilarious as Spot Conlon, though he didn't get enough stage time, and all the adult actors were good. The choreography and lighting were amazing, the set brilliant, and the orchestra perfect. Unfortunately, the music was just slightly too loud, which sometimes made it hard to discern what the actors were saying. I seem to remember this being a repeated problem with shows at the Keller Auditorium, so I don't know if it's just the venue or what.

Another thing (I don't know if it's a criticism or not), the show seemed to move REALLY fast - as in when Act I ended and the lights came on in the theatre, my sister and I turned to each other and said, "what? already?" As I said earlier, I think the show could have benefited from a little more character development and a little more conflict, or maybe just conflict that was drawn out a little longer than it was. But I think there might have been a very good reason for this, which is that the musical is geared towards a younger audience. It's still a really fun show if you're older, but I think the way the story unfolds is meant to cater more to kids than adults, and (though I can't technically speak as a kid) I think it hits the mark spot on in this respect.


Finally, I want to give a shout out to the audience for having an awesome level of engagement and enthusiasm throughout the whole show. There was laughter, applause, and audible drawn-out gasps throughout, and an overwhelming ovation at the end. Maybe part of that is just the show's dynamics; but it helps to have a good audience.

And at the end of this review, let me just say it one more time: THE DANCING.

All in all, Newsies is an exhilarating amount of fun, a definite family musical, and entertaining across ages, featuring inspiring characters, a good message, and dance scenes you never knew could happen.

So if you get the chance to see it, I'd say, yeah, seize the day.
(You knew that pun was inevitable.) 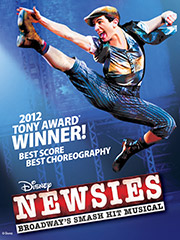 Until tomorrow.
Posted by Erin at 7:32 PM No comments:

Hello friends, Romans, countrymen, Narnians, rebels, and free peoples of Middle-Earth! (If that didn't cover you, consider yourself included by default.)

Apparently my resolution to post every first Thursday took a month off. So here, a little late but still on a Thursday, is a post of relatively-random miscellany.

First, some Little Prince news: Netflix has taken over the rights to the film and will be releasing it... at some unknown future date. This means - barring a small miracle - we won't get to see it on the big screen. (sigh). If you have any further news on the movie, pleASE TELL ME!!!!!!

Second, I'm seeing Disney's Broadway musical Newsies in Portland tonight and will try to get a review of the play posted by my first Thursday deadline in May. However, I make no promises. You can go on strike if you want, but it won't make anything happen faster.

Third, I recently became aware of a program known as VidAngel which allows you to watch clean versions of PG-13 and R-rated films. The website (www.vidangel.com) lets you set your own filters, after registering, so you can choose how much you want to edit out of language, sex, nudity, violence, disturbing images, and Jar Jar Binks (yes, it really does let you edit out Jar Jar Binks; also the new scenes in the original Star Wars trilogy).

Though it might take a couple uses for you to figure out where you should set your preferences to ensure you don't see the bad stuff while also not missing out on key plot points like main characters dying (apparently my graphic violence filters were too high when I watched The Matrix), it's great for film enthusiasts (like me) who don't watch R-rated or even sometimes especially sketchy PG-13 rated films. I finally got to watch The Grand Budapest Hotel and for those of you who like Indie films with an original story, clever script, and high degree of artisanship - plus great actors - the film is a must-see. Also, it's hilarious.

Finally, enjoy some photos from my sister and I's Hitchhiker's Guide to the Galaxy Party. She'd just finished reading the first three books in the "trilogy" for the first time, and wanted to see the 2005 movie starring Martin Freeman, despite my warning that the film is a vast disappointment (though brilliantly cast).

Our menu included Babel gold-fish, non-alcoholic Pan-Galactic Gargle Blasters (if you want the recipe I'll try to remember how I made them), and ... some other snacks that had nothing to do with Hitchhiker's Guide - you'd be surprised how difficult it is to come up with HHGTTG themed snacks (yes, I got tired of writing the whole title out; from this point on you will see a number of different abbreviations, none of which really work). We also carried towels. 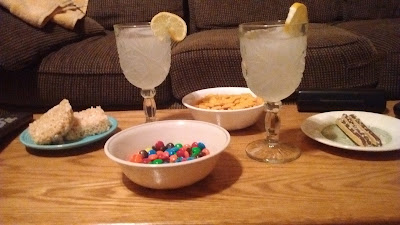 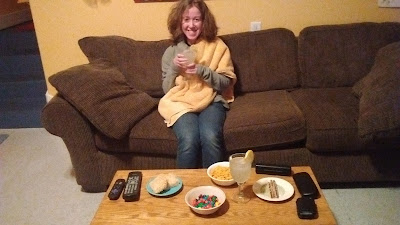 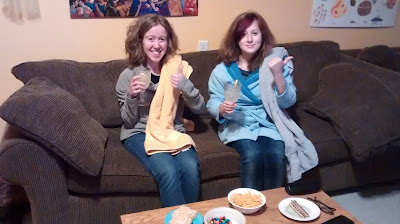 On a second viewing, the movie wasn't as bad as I remembered it being, but then again, my expectations were below ground-level. My sister and I agreed that the first third of the movie was great and we were laughing our double-heads off, but around the middle, the film took a dive, to be partly redeemed in the last third of the movie. Whatever else I can criticize about the H2G2 film (and there's a lot), I can say nothing at all against the casting. Martin Freeman as Arthur Dent, Zooey Deschanel as Trillian, and, of course, Alan Rickman as Marvin the manically depressed robot are all brilliant moves. Not to mention the actors who play Ford and Zaphod, also perfectly matched up, and Stephen Fry as the voice of the Guide. Seems like a recipe for success. Ah well.

Email ThisBlogThis!Share to TwitterShare to FacebookShare to Pinterest
Labels: Movie, Movie Review, star wars, The Little Prince
Newer Posts Older Posts Home
Subscribe to: Posts (Atom)
The Wood Between the Worlds is dedicated to bringing you great book reviews. Looking for your next favorite book? Find it here. Have a book you'd like us to review? Give us a shout.