Review: In 'Stripes Recruitment,' the job search is tough for a tiger 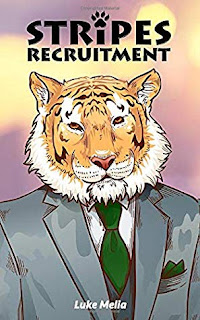 
As anyone who's ever been unemployed will tell you, the job search is tough.


OK, but it's a lot tougher when you're a tiger.

...if not for the fact that he's a tiger, and no prospective employer can seem to overlook that obvious fact.

Is Stripes stuck forever at the humdrum construction job he hates? Or can he change his stripes?

When I read the premise behind this story, I laughed out loud. And "Stripes Recruitment" is funny. I'm struggling to think of a word that describes it (surreal? absurd?) and of something similar to compare it to (Monty Python?). But even if I can't quite put neat boundaries around this story, I enjoyed it very much, and while it made me laugh, it also made me think.

In theatre and fiction, ridiculous objects or characters are sometimes set in commonplace surroundings to show us something. The ridiculousness of the situation brings to our attention things we otherwise wouldn't have noticed. On another, wider level, this is the ultimate purpose of fantasy stories. But let's not go there right now, because I'm guessing you don't want to read a 30-page manifesto about the importance of fantasy literature in modern society. (Unless you do, then go read Tolkien.)

So what is "Stripes Recruitment" trying to bring to your attention?

I can only speak for myself, but this story made me think about my own career path. As an English major, I was basically told I could either teach or go into law, and after surviving 16 or so years of school and doing a brief legal internship, neither of those options appealed to me. So then (sorry you're getting my life story now) I stumbled onto the idea of copywriting. This was something I could do! But I don't interview well, and I didn't have a lot of experience, so I struggled to "get my foot in the door" for a traditional in-house or agency copywriting job. Then I discovered freelancing: something I hadn't even known was a possibility.

Stripes finally comes to the realization that no traditional employer will hire him. If he wants to achieve his dreams, he'll have to blaze a new path to reach them. I know it sounds like a cat poster, but it's true and it's possible and, guys, you can do it. Thanks for coming to my TED talk.

In short, "Stripes Recruitment" is a neat little story with an intriguing premise, a fun style, and an empowering message. Instead of changing your stripes, change your worldview. Open your mind to conceive of new possibilities, and you'll find the world open at your feet.

Until tomorrow.
Posted by Erin at 2:23 PM No comments:

Review: In 'The Scion's Delight,' a tyrannical, sadistic empress is... lovable? 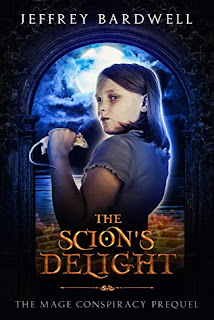 Princess Cordelia has steel plate ambition, a mind like twisting brass gears, and the political might of tin foil. The girl aims to ratchet the Iron Empire into a glorious new day of gears and steam. The entire palace is arrayed against her. The chambermaids disdain her. The emperor ignores her. The mages, championed by Lord Oriolanus, lead a brisk campaign of lies and coercion. Those evil magic users threaten to tighten their grip upon the land even though machines are clearly superior. By the gods' oil-stained hands, why can't anyone else see her vision of the ideal future?

Just when Cordelia's future threatens to slip back into medieval quagmire, a lone stranger with ice blue eyes and flowing blond hair arrives from the savage north. The handsome barbarian is destined to make both the hearts of the empire and the princess tremble. Does this spell doom or salvation for the girl's fragile dream?

Explore The Scion's Delight, the fantasy romance prequel novella of The Mage Conspiracy series. Discover a world of adventure and intrigue where lies cut deeper than any sword.

The Mage Conspiracy series revolves around two sisters: Maven and Minverva, a mage and a soldier, best friends and dire rivals, both competing for the love of Sir Corbin Destrus.

In The Knight's Secret, The Dragon's Mercy, and The Soldiers' Heart (the first three books in the series), we learn to love these two--even if they're exasperating at times--through the eyes of Kelsa, granddaughter of Corbin and Maven (the only member of the legendary trio still living).

And we learn to hate the tyrannical woman who makes Kelsa's and Maven's world a living hell: Empress Cordelia, a twisted, psychotic dictator with a vendetta against all mages.

So, naturally, a prequel to the series can only be expected to focus on that most endearing of characters: Empress Cordelia, long may she reign.

OK, clearly, it's not the most obvious choice for a prequel. But the fact is that the story of Kelsa, Corbin, and the two Dragon Warriors doesn't need a prequel. Their stories all start in exactly the right place, at exactly the right time, and we get a lot of backstory in flashbacks throughout these three books. If there's one character who desperately needs a backstory, it's Cordelia.

And you know what? After reading said prequel, I kind of...love her.

Resourceful, passionate, clever, and surprisingly sensitive--who knew the diabolical ruler of the Iron Empire had so many great qualities? And who knew I'd end up feeling so much sympathy for her?

The Scion's Delight gives us a glimpse of Cordelia's youth and a taste of the experiences that shaped her, both the bitter and the sweet. We see why she hates mages (and honestly, who can blame her?), where she got her stubborn streak, and why she's just a little on the sadistic side.

And despite the fact that her hobby is running a death maze for rats, that she'll stoop to anything to thwart the man she hates, and that she ends up unintentionally betraying her most loyal friend, I'm still oddly charmed by Cordelia.

Whatever else she may or may not be, she's strong. And now that I understand her better, I'll return to the world of The Mage Conspiracy more eager and invested in all the characters, including the "villain."

If I were going to make one criticism of this prequel, which would be a slight one because I really enjoyed it from start to finish, I'd just mention in passing that the chapters from Mustellus' perspective were a little difficult to interpret. I get why and I appreciate the dedication to authenticity involved. Mustellus is Cordelia's barbarian servant, and as such, he has a broken command of the English language. But like, after five years immersed in the Emperor's court, wouldn't he learn to speak English?

Possibly not. But whatever the case, the chapters from his perspective are written in broken English and it means the reader has to do some work sometimes to figure out what he's trying to say. It's also slightly jarring / confusing when the narrative jumps back and forth in time.

But like I said, I still enjoyed it very much. And I never saw that ending coming.

A+ for the women in this series. Not only are they boss as heck, they're satisfyingly two-sided. Even the heroines have their villainous moments, and even the villain has her moments of heroism.

The one exception may be Kelsa, who doesn't really have a dark side because she's just all-around awesome. (As you can tell, because in this review of a book in which she is never mentioned once and is in fact not even born yet, I clearly can't keep myself from talking about her. Sorry, Cordelia.)

Until tomorrow.
Posted by Erin at 2:11 PM No comments:

Email ThisBlogThis!Share to TwitterShare to FacebookShare to Pinterest
Labels: Book Review, Fantasy, Steampunk
Newer Posts Older Posts Home
Subscribe to: Posts (Atom)
WE ARE CURRENTLY TAKING A HIATUS FROM NEW AUTHOR REQUESTS. PLEASE ONLY REACH OUT IF WE'VE REVIEWED FOR YOU BEFORE.