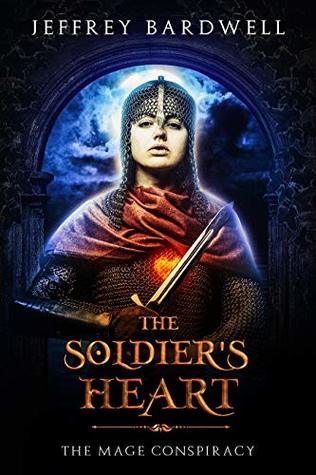 A perilous journey. A dark conscience. An unforgivable sin.

When Black Guards capture the ancient mage Maven and the heroine Kelsa, Maven disguises herself as the once distinguished Sir Corbin, now assumed to be a mage-in-hiding due to the old woman's carelessness. Kelsa, guided by the spirit of a sassy blade mistress, pretends to be a mercenary, but the guards wonder. What ties beyond gold bind her to the traitor knight? The Black Guards gleefully drag their prisoners toward the cruel clutches of the empress so that she might wring the secrets from their bodies.

Kelsa must escape the empress's grasp, desperate to rekindle the mage revolt whose leaders have vanished into the barbarian north. It is a land of dark forests and ice-choked rivers where worth is proven on a dagger's edge and feuding clans are more vicious than any Black Guard. Can Kelsa find and reignite the mages' passion or has the heart of the revolution grown cold?

Grab The Soldier's Heart, the third epic fantasy romance of The Mage Conspiracy series. Discover a world of adventure and intrigue where lies cut deeper than any sword.

That's sarcasm, readers. I loved The Soldier's Heart. As if the above weren't enough, there's another story line told in parallel: one about a young recruit navigating the Imperial Army, falling in love, and proving herself to the world.

Kelsa's story is the immediate one. She's the young heroine journeying through barbarian country in search of Gordius and his rebel mages.

Meanwhile, due to a stubborn mage who messed with her head (see book 2), Kelsa finds her thoughts often invaded by Minerva--the young Imperial Army recruit--and as a result we also get Minerva's story (happening in the past) alongside Kelsa's.

You might think that would be confusing, but it's not because the author has an uncanny knack for telling multiple stories simultaneously. Far from being confusing, two plots makes the novel doubly engaging.

It helps that both stories are helmed by killer protagonists. I've loved Kelsa since book 1, but it was this book that really endeared me to Minerva. She's formidable yet vulnerable; prickly yet affectionate; she could take everyone down but deep inside, she just wants to be loved.

While I felt like the last book in this series wandered a bit, The Soldier's Heart has perfect pacing--all leading up to its pair of smoking hot climaxes: Kelsa must convince the rebel mages and barbarian rulers to help her wage war against the Empress, while Minerva duels Corbin Destrus--the man she either loathes or loves.

In the first two books, we heard a lot about Corbin and Minerva, but in this book we flashback to see how they meet and progress from enemies to frenemies to lovers. It's dynamite.

My only negative reaction to this book is that it's a little crude and there's some sex scenes that made me a little squeamish. But on that note, when Corbin and Minerva finally come together, it's described in so few words, as a thing so clean and fitting, that it's a relief and it feels so right after all the messy love affairs in previous pages. Corbin and Minerva feel meant to be.

I'm eager to see where Kelsa's and Minerva's stories go in the next book--when I assume a lot of things will come to a head and there will be a day of reckoning for everyone: country girl, soldier, empress, and mage.

Email ThisBlogThis!Share to TwitterShare to FacebookShare to Pinterest
Labels: Book Review, Fantasy
Newer Posts Older Posts Home
Subscribe to: Posts (Atom)
The Wood Between the Worlds is dedicated to bringing you great book reviews. Looking for your next favorite book? Find it here. Have a book you'd like us to review? Give us a shout.