The Coming of the Spirits: the ghostly conclusion to a delightful journey 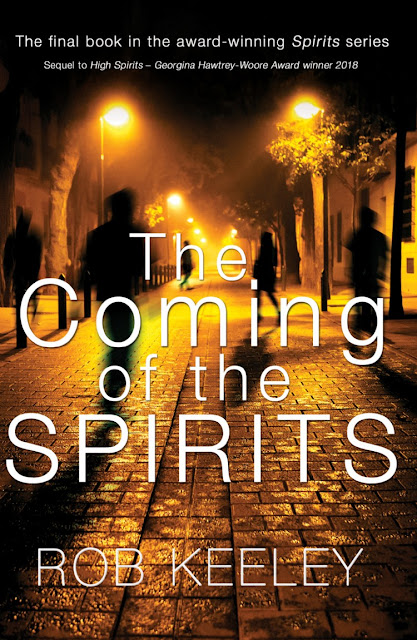 The final book in the award-winning Spirits series.

Rob Keeley is back with the fifth and final instalment in his award-winning Spirits series. The series allows young people to learn more about other times, as well as the time in which they live.

“Nazis alone were dangerous enough, but Nazis with the powers of ghosts... of evil spirits...”

Britain. The present day. The world we know. Ruled by the Nazis.
Victorian England. Edward Fitzberranger is soon to become ill and die. But could there be another way?
The Middle Ages. Sir Francis Fitzberranger is about to marry... but finds himself shifted in time.

The barrier into the spirit world is finally breaking down and no one in the mortal world is safe. History must be set back on course and prophecies fulfilled. The Grand Defender is needed.

As Ellie works with an underground resistance movement and with the spirit world too, she is about to discover her true destiny...

Here we are at last: the final book of Rob Keeley's thrilling and adorable Spirits series. True to form, I read this in one sitting. These books are like shot glasses. You down them fast because they're so good and so compelling. And just like its predecessors, The Coming of the Spirits is a page-turner, full of charm, adventure, and countless surprises.

When I say surprises, I mean all the surprises. There are so many twists and turns in this story, I never guessed what was coming next. Well, OK, I did guess one thing right, and that was regarding my favorite character in the series, Edward Fitzberranger. Happily, Edward has a significant role to play in this story, and I very much enjoyed that.

But on the whole, it was full of as many surprises and plot twists as you can hope for in a series conclusion. I was on board for almost all of them, though I found the ending a little jarring. That may have just been me. I also found it heartbreaking, which is a measure of just how attached I've become to Rob Keeley's wonderful characters.

But let's back up. The beginning of this book is pretty epic. A mysterious figure gathers all of Ellie's ghostly friends (and one corporeal one) from the previous books to assist in a crucial mission. We don't know what that mission is, and neither does Ellie. She just wants to live a normal life and maybe go on some dates with her friend Luke, but alas, book heroines never get to lead a normal life, and boy am I glad of that.

As usual, I found the characters, both old and new, fun and charming. Not to sound like a broken record, but I was absolutely gleeful when Edward made his dramatic appearance. Even if I was expecting it, it was nonetheless awesome. And now I'll try not to talk about Edward for the rest of this review.

This is definitely the most dystopian of the Spirits novels. We're in a new world ruled by Nazis where no one is safe, and to make matters worse, evil ghosts get loose about halfway through, and then everyone's pretty much just a dead man walking... unless Ellie can fix things.

There are also some complicated moral dilemmas in this book, for example, is it OK to steal money from your friends if you're going to use it to save the world? So things get pretty intense. In fact, this is definitely the most intense of the Spirit novels as well. Things may have been a little spooky before, but now Ellie's really in trouble and there's probably no going back.

I never imagined where this series would lead when I first found myself riveted and charmed by the delightful Childish Spirits. Looking back, I think that first book is still my favorite, simply because it was perfect. But I've enjoyed the whole journey with Ellie and her friends, and I'm glad I got to ride this ghost train to the end.

Email ThisBlogThis!Share to TwitterShare to FacebookShare to Pinterest
Labels: Book Review, Ghosts, MG, Middle Grade
Newer Posts Older Posts Home
Subscribe to: Posts (Atom)
The Wood Between the Worlds is dedicated to bringing you great book reviews. Looking for your next favorite book? Find it here. Have a book you'd like us to review? Give us a shout.