The Little Prince gets release date and new trailer

I thought you might be interested to know that The Little Prince movie now has a release date of August 5th.

Email ThisBlogThis!Share to TwitterShare to FacebookShare to Pinterest
Labels: Movie, The Little Prince 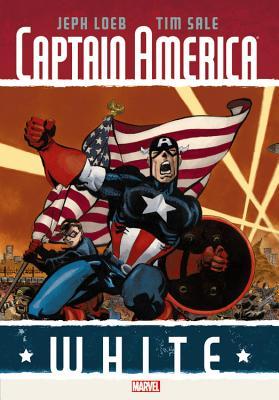 Synopsis: For Steve Rogers, the hardest thing about being a man out of time is being a man without a best friend. As Captain America comes to terms with his loss, he longs for the black-and-white moral simplicity of world war II . . . Bucky Barnes charging fearlessly into battle at his side. The Howling Cammandos right behind. Odds against them, lives on the line, taking the fight to the greatest evil of all.

"No adventure is complete without a love story. And, yes, these books have one - the longest, most tortured one in Marvel history, in fact. We're talking about Steve and Bucky, without smirking or innuendo or raised eyebrows. Platonic though the relationship may be, from the meet cute to the tragic separation, their bond has all the elements of a classic romance. These two men love each other - as any pair of friends who faced exclusion, combat, inhumanity, and death would. Their bond stretches across half of the twentieth century. The loss of it gnaws at Steve throughout modern day, and it slices his heart in half when the Winter Soldier rears his tormented, homicidal head. . . Steve and Bucky are each other's soulmate, if you will, because no one on Earth understands what either of them has been through as well as the other does. . . . Soldiers fight for their country. They fight for themselves. They fight for each other. And sometimes they die for these things, too. The ones who don't carry the memory of the ones who did for the rest of their days. Steve Rogers is no different."

This book starts just as Cap comes out of the ice to learn that he slept his life away in the ice, it then explores the early relationship of Captain America and Bucky Barnes, from the moment Bucky finds out just who Steve is, through one of their exciting adventures with the Howling Commandos. Throughout the story Steve's thoughts are shown in blue as he muses over his best friend and all that he lost.

Yes, the adventure is quite riveting, but the story is really about Steve's emotions and love for his best friend James Buchanan Barnes.

One of my favorite scenes is when a plane carrying the Howling Commandos, Cap and Bucky explodes over the Atlantic. The terror in Bucky's and Cap's eyes are painfully clear as they reach for each and miss. As they go down into the water modern Steve interjects a thought which I believe to be the theme of the story: 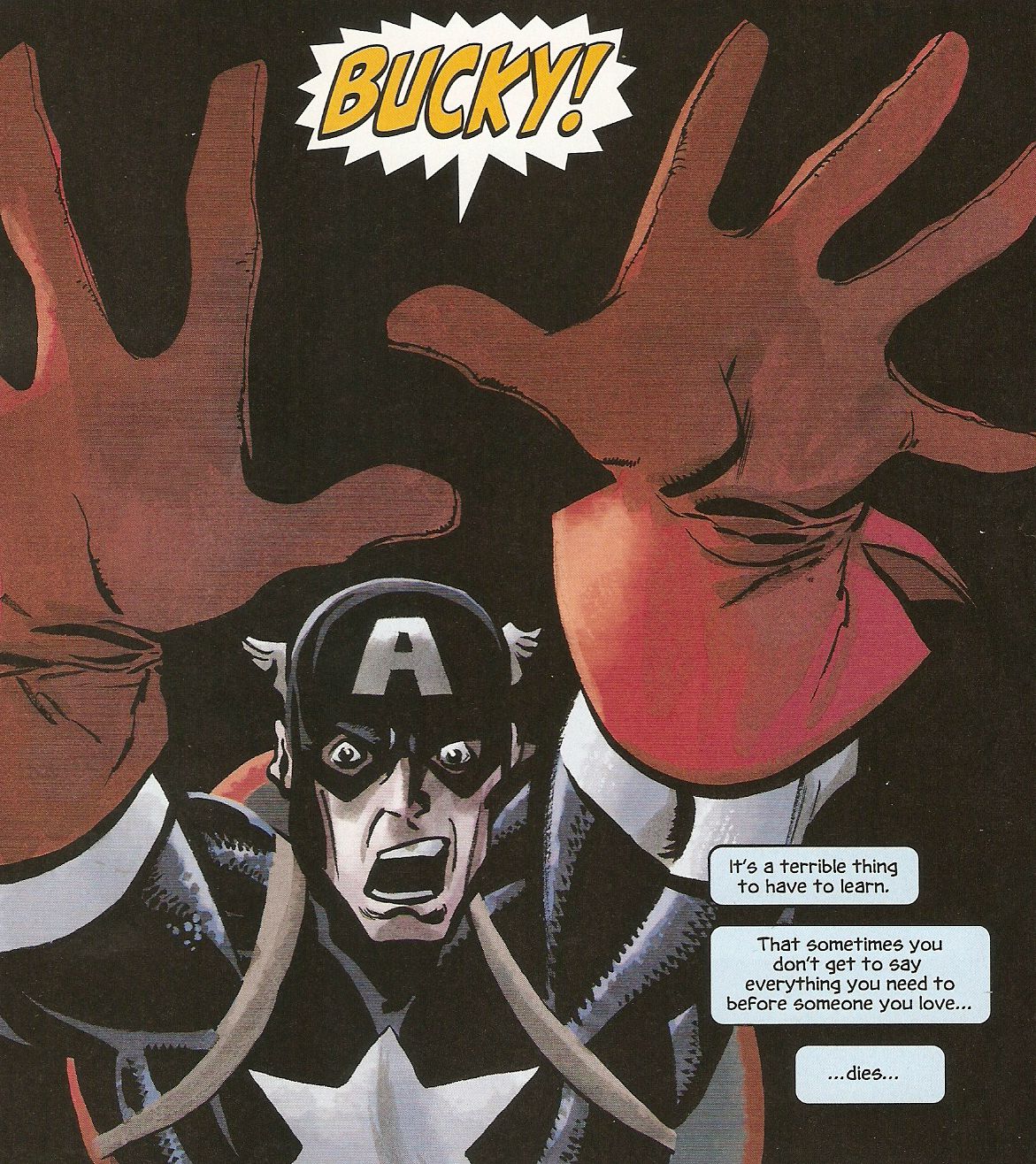 Steve is knocked out as he hits the water and sinks slowly in the dark. Up top, Bucky is losing it, and although the commandos tell him Cap is probably hanging on to wreckage somewhere else he doesn't believe it, and dives under to save his partner. At the same time Steve's thoughts are present in blue:
"In the deep it got darker and darker. But I never felt alone knowing you were there. Somewhere. That was the part that no one understands. Or could understand. In war, you forge friendships. Bonds with the most unexpected folks. Like a 4F from Brooklyn and an orphan kid hanging around a Virginia Army training camp. Captain America and Bucky. When we lose someone we have a tendency to hold onto things in their memory. Meaningless things to anyone else. . . I know a little something about holding onto things long after you should We get attached to these things when it's the people we lost that we should stay attached to. Their hopes and dreams become ours to carry on."

Cap is saved by Bucky, and the story continues - bringing them behind enemy lines in France. It is there that they meet their french contacts and while Bucky wants to take down the Red Skull right then and there, the crew decides against it, and instead focus on Baron von Strucker. Just as they are about to set their plan into motion Cap realizes that Bucky is missing, and putting two and two together races after him into the dark. Unfortunately he arrives too late. The Red Skull is hanging off of the Eiffel Tower, which is rigged with explosives, dangling Bucky who is wrapped in barbed wire and more explosives. Cap has to make a decision, save his partner, or save the Tower and much of Paris from blowing up.
"The mission was so clear in my mind I couldn't lose you. It was never about black or white or good or evil. The mission. The orders. I couldn't lose you . . .

. . .Keeping you safe, James. In some ways, that's all I ever wanted to do throughout the war. I hope you'll understand why your death will always be my greatest failure."

Cap of course is able to save both Paris and Bucky (because he's cool like that). As he's punching the Red Skull in the face (it's really quite satisfying) his thoughts continue to race across the page.
"I got into this war - this uniform - to stop men like the Red Skull. Was I naive to think that one man - particularly if it were me - could make a difference? Or is that why I wear the flag of the greatest country there ever was? Because no matter the odds if we don't fight for those who can't - who will?"

The adventure is finished and Cap and Bucky ride away on their motorcycle, and it cuts back to present day. Fury and Cap stand in front of a memorial to Captain America and Bucky Barnes. Cap is full of so much grief and self loathing that he couldn't keep his partner safe. In a moment of anger he throws his shield knocking of the head of his statue leaving only Bucky. His last remarks are as follows:
" I'm sorry, James. I wish we could bring back the dead. Maybe someday we can. I'm now living in the future like those comic books they sold during the war. Flying cars and everything. Isn't that where you said anything could happen? For now you're gone, Bucky. And all I have left are the memories of a young man who only wanted to win the war."

I admire Cap's moral strength and integrity, as well as his ability to take down anyone and anything. I love Bucky's loyalty and caring, he was Steve Roger's friend long before there was even a hint of Captain America. Yes, they're just fictional characters, but that doesn't mean you can't learn from them.

I realize this review has been long, but I feel like I can never be done talking about Cap and Bucky. Did I enjoy the book? The answer is an enthusiastic yes, with tears on the side. Marvel readers who want a fun exciting story, may not enjoy this, but readers who actually feel invested in the characters and their feelings, will, I think, find this as wonderful as I did.

My hat is off to both Jeph Loeb and Tim Sale. If you haven't yet read their other "Color" books - Daredevil: Yellow, Spiderman: Blue, and Hulk: Gray, I suggest you do. This comics are different from anything else I have ever read, never have authors been so invested in the emotions and thoughts of their characters, and never has grief been illustrated so well in the Marvel universe.

Email ThisBlogThis!Share to TwitterShare to FacebookShare to Pinterest
Newer Posts Older Posts Home
Subscribe to: Posts (Atom)
WE ARE CURRENTLY TAKING A HIATUS FROM NEW AUTHOR REQUESTS. PLEASE ONLY REACH OUT IF WE'VE REVIEWED FOR YOU BEFORE.