The Knight's Secret by Jeffrey Bardwell 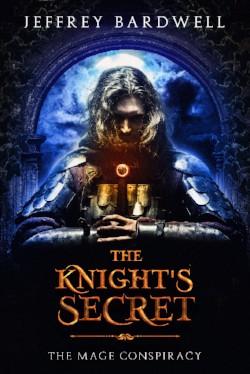 It has just come to my attention that, while this book won't launch solo for a few months (stay tuned), you can now buy it as part of an epic fantasy anthology on Amazon. And I've got to say, if the other books in the anthology are anything like The Knight's Secret, it would make a fantastic Christmas present for that epic fantasy fan in your life. (Or for yourself: because this is the 21st century and you're a responsible, mature person and you should be able to buy yourself a Christmas present if you want to, darn it.)

Retired hero Sir Corbin rides to the capital of the Iron Empire for one last adventure. But the capital is in an uproar. The emperor has been slain by rogue mages. The new empress is livid. Soon all mages are suspect . . . including Corbin's daughter.

Corbin attempts to find allies among his old regiment. The army has become a slithering nest of vipers as imperial mages and cavalrymen move warily around each other. Both sides snare Corbin in tight coils of suspicion, politics, and lies. He is caught between a tryst with a jilted mage ex-lover and the tight-lipped scheme of an ex-buddy in the cavalry. When the vengeful empress launches a vendetta against all mage kind, Corbin must decide whether to be a father or a hero.

The bickering mages and cavalrymen aren't the only ones hiding something. Sir Corbin is not who he seems. Discover The Knight's Secret, the first fantasy adventure in The Mage Conspiracy series. Join a quest of self discovery, romantic entanglements, and political intrigue where lies cut deeper than any sword.

You might remember a certain post in which I gushed over the steampunk/fantasy novella Rotten Magic, written by Jeffrey Bardwell. Now I'm back to tell you about another book by the same author, which takes place in the same world: The Knight's Secret. And I'm pleased to report that the author is still in full possession of his powers as a storyteller.

While I wasn't quite as over-the-top thrilled with The Knight's Secret as I was with Rotten Magic, I still loved it. The Knight's Secret continues Bardwell's gritty, character-strong fantasy style. It's a page-turner, with a complicated world, very real characters, and another of those cliff-hanger endings this author is so good at. (He knows how to keep us reading, am I right?)

Kelsa, the (more or less) main character of the story, is the granddaughter of legendary military hero Sir Corbin Destrus. She's grown up hearing about his adventures, but there seem to be a couple of things he's never told her.... Meanwhile, the state of the kingdom isn't looking so good. The emperor is dead under mysterious circumstances, and the new empress is ruthless. Anyone who practices magic comes under fire, and civil war looms on the horizon.

As in Rotten Magic, but maybe even more so in this book, the author does a great job painting the backdrop for us. The world of The Iron Empire is vivid and politically complex: with conspiracies, machinations (just wanted to use that word), and a good deal of witch-hunting. Literally.

The same can be said of that world's characters, who all come off as compelling and natural. Main characters like Kelsa, Corbin, and Maven are well-rounded and complex. I love Kelsa's preference for stripping and walking around naked - but also love that she doesn't do it to attract attention. She just enjoys walking around naked.

Speaking of, um, getting naked...the portrayal of the two genders is one thing this book does especially well: a main theme seems to be the differences between men and women. Sometimes these differences are divisive; sometimes they're unifying. And without giving anything away, the gender element is wonderfully highlighted in Kelsa herself and her story arc. The author has an equally strong grasp on both his male and female characters.

The character complexity was one of the things I loved most about Rotten Magic, and that element is definitely alive and well in The Knight's Secret. No one is just a token character - and most can't even be squarely cast as either "good guys" or "bad guys." That makes this story all the more satisfying.

Until tomorrow.
Posted by Erin at 3:03 PM No comments:

"I wonder the wonder, freedom of freedoms, play for you nightly and sing in the rain.
I pray for your ghosts to let you off lightly, lessen and get rid of your terrible pain." - Expressions of an Artist: The Whole Shebang 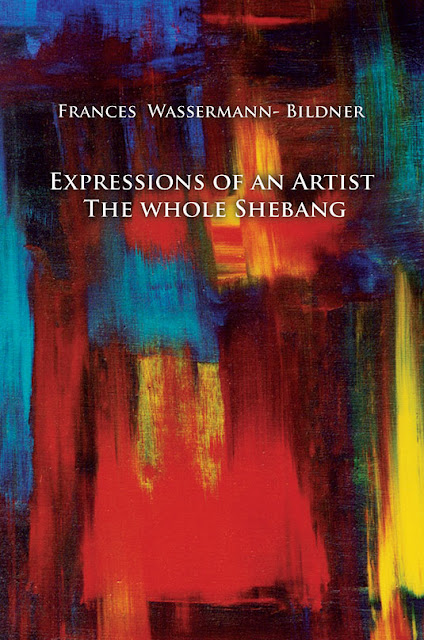 Hey bibliophiles! Today we have a guest post from author and artist Frances Wassermann-Bildner. She'll give us a short overview of her book Expressions of an Artist - a mash-up of painting, writing, and poetry. Sort of. I'll let the author take it from here....

Expressions of an Artist: The Whole Shebang

This book is not a novel, nor a book of short stories. It is a collection of writings and paintings. It encompasses the human condition by covering topics such as love, loss, living, fear, political, outsider and belonging. Each piece of writing is written automatically and quickly. The writing actually writes itself and the author is a vehicle for her work. The paintings are done in the same way. There are no preconceived ideas in either paintings or writings.

Although the work is produced this way, it does touch the subjects that we are all concerned with. This is because the artist/author is a product of the human condition and will therefore hold these subjects in her subconscious.

Some of the work is quite dark, all of it is filled with energy and emotion and an appreciation of life in all its facets.

The book has been collated into these topics by a reader. One can easily dip in and out or read it cover to cover.

Here's an excerpt to whet your appetite:

Champagne crystals, camaraderie, flight, bubbles in the air, bubbles everywhere, aeration, colour, sanguine moments. Spirit alive entering the gates of nirvana. Chrystal, veuve, what’s in a name, the purity, the semblance of a glass of champagne. Jockeys fly, horses neigh, the culmination of another day. Psychics, mediums, bursting through, who’s to say what’s you and you.

Anticipation, bubbles and expectation. I put my hand around your waist and tasted friendship. Not formed in haste. Champagne you asked, is it free, Champagne you queried for you and me?

Bubbles of life, love and laughter floating above the heavier matter. Champagne cocktails, chitter chatter. Corks that pop, love a lot, fizz in the air. Champagne everywhere, in the bath a glass between friends making many amends.

From Austin Macauley Publishers
From Amazon

Frances Wassermann-Bildner has been painting and writing for many years. This book is the culmination of these many years. She was born in Buenos Aires and has lived in London and New York. These cities, their vibrancy and color have greatly influenced her work. She is also the founder of Creative Wiz Kids: a children’s entertainment company where children come to paint and dance and adults also come to have fun! She loves the honesty and immediacy of children and finds working with them extremely stimulating. Along with her artistic work, Frances has been running these groups for almost twenty eight years!

Frances loves to travel and visit different countries, sitting in cafes and meeting people. She has two wonderful children, a lovely daughter-in-law, a grandson and another grandchild on the way. She plans on taking her grandchildren traveling when they are old enough!

And that's the whole shebang! 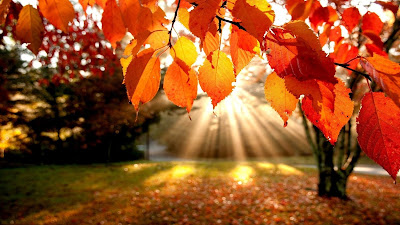 It's been a while since our last session of Poetry Appreciation, and I know you've all been just dying waiting around for the next one.

Whatever. I'll skip the sass and cut to the poetry now.

Autumn is probably the most poetic time of year, don't you think? Autumn is so crisp, poignant, and exciting.

Here's the first of my two favorite poems about autumn:


The morns are meeker than they were -
The nuts are getting brown -
The berry’s cheek is plumper -
The rose is out of town.

The maple wears a gayer scarf -
The field a scarlet gown -
Lest I sh'd be old-fashioned
I’ll put a trinket on.

By the immortal Emily Dickinson. She's my favorite.

A lot of her poems leave me scratching my head (which only adds to my enjoyment - it's not poetry unless you feel the top of your head being taken off, as Emily herself would say). But this one I think is very accessible. Even if you've never read an Emily Dickinson poem, you can jump right in.

To my knowledge, it's the only poem she ever wrote about autumn. Which is actually a little surprising. Maybe she preferred the spring.

Here's the second. It's a bit longer, so I'll just give you the first stanza, and encourage you to look up the rest if you like what you see:


Season of mists and mellow fruitfulness,
Close bosom-friend of the maturing sun;
Conspiring with him how to load and bless
With fruit the vines that round the thatch-eves run;
To bend with apples the moss'd cottage-trees,
And fill all fruit with ripeness to the core;
To swell the gourd, and plump the hazel shells
With a sweet kernel; to set budding more,
And still more, later flowers for the bees,
Until they think warm days will never cease,
For summer has o'er-brimm'd their clammy cells.

Give it up for John Keats, my other favorite.

The first time I read this poem was in my Romantic poetry class at BYU. Our professor gave us a print out of "To Autumn" and told us to go sit outside somewhere and read it. That was the whole class for the day. Did I mention it was autumn? Yeah, pretty much that professor was the bomb.

On the surface, this poem is just a beautiful description of autumn. Fruit is ripening and getting ready for harvest, and there are a few last warm days before winter sets in.

But underneath, Keats is exploring the idea of "ripeness." He's probably alluding to the line in one of his favorite plays, King Lear:


"Men must endure Their going hence even as their coming hither. Ripeness is all."

In other words, you don't get to decide how long you live, or when you die. It comes when you're ripe for it. And the best you can do is accept it gracefully.

This was especially apt for Keats, because he always had the sense that his life was going to be cut short. It ran in the family: his father, mother, and brother all died young, and his grandmother died "before her time."

("Why do you write like you're running out of time?" as Hamilton would say. OK, I've never seen Hamilton or even listened to it, but that line is amazing.)

Anyway, the upshot is that Keats died at 25, so that premonition was pretty spot on.

This has been Poetry Appreciation with Erin. I promise it's not always this depressing.

Email ThisBlogThis!Share to TwitterShare to FacebookShare to Pinterest
Labels: Poetry
Newer Posts Older Posts Home
Subscribe to: Posts (Atom)
The Wood Between the Worlds is dedicated to bringing you great book reviews. Looking for your next favorite book? Find it here. Have a book you'd like us to review? Give us a shout.