Guest post from Luke Melia: author of 'Give Up the White Room'

Today we're sharing a guest post from Luke Melia, author of Give Up the White Room--a novel about a puzzle-solving young woman who struggles with agoraphobia and OCD. 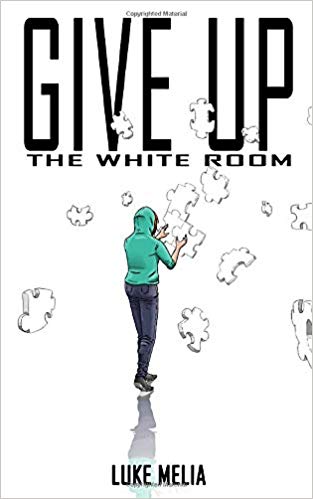 
Give Up the White Room is my first novel. Prior to publishing it in 2019, I had only written comic books, so a piece of long-form prose presented quite the challenge. On top of that, I chose to write about some difficult themes, as my protagonist Reya struggles with both agoraphobia and obsessive-compulsive disorder.

I portray these mental health issues in writing through Reya’s first-person narrative. As the reader, you see events from her perspective and, through her inner monologue, get a sense of how she processes the world around her. Reya uses her natural gift for solving puzzles as a way to approach her mental health.

This is where Ivan comes in. Ivan is an essential character in the novel, maybe as important as Reya herself – in a sense because he is Reya herself. Ivan doesn’t exist – he’s a therapist Reya consciously creates as a way to self-medicate. She sees her mental health issues as a puzzle, and Ivan is part of the solution.

When we first meet Reya, she and Ivan are working on a plan to build her confidence to a point where she can leave the house, walk to a local shop, buy milk and come home. This might sound like the simplest of tasks, but for someone suffering from extreme agoraphobia, it presents a monumental challenge.

‘Talk me through the plan’ is the second chapter of the novel and consists of a dense conversation between Reya and Ivan, during which I explore the meticulous extent to which she has to plan even the most basic activities. My aim was to give an insight into the depths of her mental illness and explore just how crippling agoraphobia and OCD can be. I was very conscious, though, that if I didn’t write it well it could easily come off as a boring slog in which a woman talks to herself for several pages about going to buy milk!

This chapter is so important to me as it shows how Reya thinks, how she plans, and how she perceives the world in a different way to most people. It’s key that the reader understands this early on so that later in the narrative the decisions she makes and the ways in which she approaches people all make sense.

Reya knows that Ivan isn’t real. She explains why she created him, and how it was a conscious decision to do so. From that moment on, I wanted the reader to see Ivan the same way that Reya does – as a separate entity. His purpose is to challenge Reya’s thought processes, so the two of them are able to look at the same situation from different perspectives. Reya’s is one of fear and emotion, whilst Ivan can take a colder, more methodical view.

As Reya’s therapist, Ivan insists on a level of professionalism in their relationship. However, he is the only ‘person’ with which Reya has conversed for the past six years due to her reclusive lifestyle – at times, their relationship slips into friendship, sometimes with Ivan even acting as something of a parental figure.

In establishing these elements of the story, hopefully I’ve written a chapter in which the two of them discussing the plan to go and buy milk is interesting, thought-provoking and an authentic but sensitive look at how Reya struggles with her illness.

Of course, this is only the beginning… when her plan goes awry, Reya retreats to the safety of her home, and that night when she sleeps discovers a boundless and magical place called the ‘shared Dreamspace’. There she can bring to life anything she imagines and has the opportunity for the first time in six years to talk to, connect and form relationships with a group of fascinating and eccentric individuals from around the world.

Reya and Ivan’s relationship grows increasingly strained as Reya becomes obsessed with this ‘White Room’, which Ivan does not believe exists… but if you want to know more about that, you’ll have to read the rest of the book!

Eager for more? Read Give up the White Room.

Email ThisBlogThis!Share to TwitterShare to FacebookShare to Pinterest
Labels: Guest post, Science Fiction
Newer Posts Older Posts Home
Subscribe to: Posts (Atom)
The Wood Between the Worlds is dedicated to bringing you great book reviews. Looking for your next favorite book? Find it here. Have a book you'd like us to review? Give us a shout.