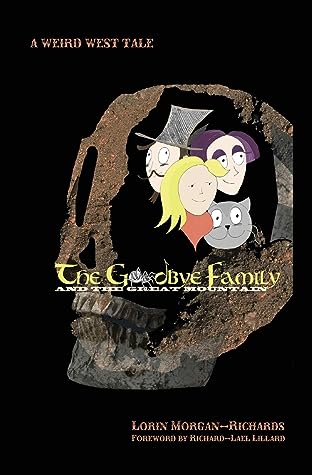 Goodreads Blurb:
The Goodbye Family and the Great Mountain follows the lives of Weird West undertakers Otis, Pyridine, and their daughter Orphie. Pyridine is a witch and matriarch mortician, Otis is a brainless but bold hearse driver, and Orphie is appointed grave digger for her strength of twenty men. Through bumbling, Otis discovers his neighbors are turning into zombies, a mystery that is directly affecting their burial business. In their backyard cemetery, they travel to the underworld for answers and uncover a plot to surface the evil entities that would otherwise burn in the Lake of Fire, have risen again through oil pumps that are bottled up as a tonic medicine for the ground above. The tonic goes fast, and the host takes over the body when the body perishes. Can the Goodbyes hilarious gaffes and revelations plug up the works? Find out in this fast-paced carriage ride through the underworld.

My Thoughts:
This book is weird, it's wacky, funny, clever, and also pretty gross. It follows the Goodbye family as they learn of the current zombie invasion, and deal with it by taking a trip to Hell, (well, the underworld. I think. Pretty sure there were living people there as well . . .). I found myself laughing out loud (or at least exhaling from my nose) at many of the clever and ridiculous lines in the book. Otis and Pyridine combined are a force no one wants to be on the wrong side of. Otis is great at throwing out sentences that are so confusing any villain (living or otherwise) must stop in order to process. Pyridine is where the brains of the family truly lies. She even tells Otis at one point - "I've never been under your leadership, you know a witch is always in charge." Orphie was also a delight. The strength and utter ridiculousness of her character was charming and highly entertaining.

One of my favorite scenes was when the family had to sneak by the man-eating plant disguised as an outhouse. Where does Morgan-Richards get this stuff?? Another lovely part was Orphie and Fleck creating more inhabitants for the city of Unabridged. The plot itself was solid, and the extra characters added to the frivolity and general wonderfully weird feeling of the story. A fun read, and something that younger fans of Addams family, or Eva Ibbotson would definitely love. Or really any kindred spirit of Orphie's with a similar love for the macabre and disgusting.

I, however, am not a fan of the macabre or disgusting. In fact I believe I have a lower than average gross tolerance. There were quite a few spelling or grammar mistakes in the book, and some parts that didn't quite make sense structure or plot-wise. However, if this sounds like something you would like, then I highly suggest it. As for me, I give it 3/5 trees.

Email ThisBlogThis!Share to TwitterShare to FacebookShare to Pinterest
Labels: Book Review, Middle Grade
Newer Posts Older Posts Home
Subscribe to: Posts (Atom)
The Wood Between the Worlds is dedicated to bringing you great book reviews. Looking for your next favorite book? Find it here. Have a book you'd like us to review? Give us a shout.