People are lovable but imperfect in Jenna Zark's 'Fool's Errand' 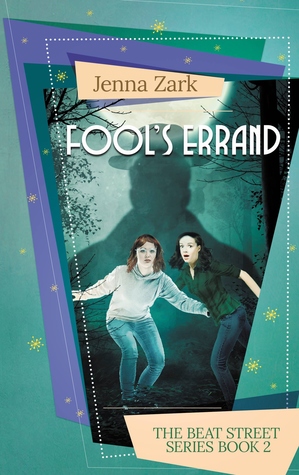 When her best friend Sophie goes missing, 12-year-old Ruby Tabeata has a choice: wait for her friend to come home or defy her parents and find Sophie.

Set during the 1950s Blacklist era when writers like Sophie’s mom were being jailed or fired, Fool’s Errand sends Ruby out of her city and her comfort zone.

With nothing to rely on but her grit and determination, Ruby has to outsmart the men chasing Sophie and her mom—discovering that whether or not you succeed, trying to save a friend is never a fool’s errand.

The Beat on Ruby's Street was one of my favorite middle grade books ever. It was amazing. I was glued to the page, I reveled in the simple yet beautiful style, and perhaps best of all, the book fed my hopeless poetry addiction.

So when I heard that Jenna Zark had written a sequel about Ruby and her friends, I was ecstatic. In my opinion, Fool's Errand didn't quite reach the level of literary perfection that The Beat on Ruby's Street achieved, but it was still a fantastic read: clever, exciting, and heartwarming.

At the center of the novel is Ruby Tabeata, and a heroine more lovable, spunky, and indomitable would be difficult to find. Being a Beat (and a preteen) Ruby is apt to question and challenge everything. She's stubborn as anything and determined not to let anyone push her around. And that extends to the people she cares about--Ruby won't let anyone harm them if she can help it. She'll do whatever she can to protect her friends, especially her best friend Sophie.

That's the starting plot for Fool's Errand: Sophie and her mother have gone missing, and Ruby is determined to find them. While The Beat on Ruby's Street painted a vibrant picture of life as a Beat in 1950s Greenwich Village, Fool's Errand paints a picture of life in the days of the Blacklist, when writers and artists had to defend themselves against accusations of Communism.

For young readers, it's an excellent introduction to one of America's darker episodes. But while it's historical fiction, Ruby isn't some antiquated 1950s heroine; she could be living in our time--and if she were, I have a hunch she'd be dealing with a lot of the very same issues: societal prejudices, broken families, political backstabbing, etc. Struggling to understand your parents, breaking the rules to protect a friend, making a situation worse when you only meant to help--these things will always be relevant.

Besides that, Ruby is such a strong, passionate character that she spans generations. She's so full of love but she gets frustrated when people don't understand her and when they harm the people close to her. She's incredibly brave and loyal but far from perfect. Aren't we all?

I think, at bottom, this book is about people: what binds them together, how they can surprise you, how a person you hate can suddenly become your friend, how a friend can make a mistake out of an overabundance of love, and how, in the end, we're all just doing the best we can.

A personal note: When I read The Beat on Ruby's Street I was living in Oregon. Since then, I've moved to New York City and wandered the charming, historic streets of Greenwich Village. Reading Fool's Errand on my daily subway commute, just minutes from Ruby's beloved Beat neighborhood, it feels like I've come full circle.