Light in the Darkness

Between the Shade and the Shadow 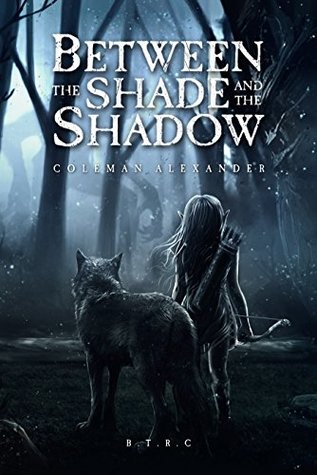 Goodreads Summary:    In the deep heart of the forest, there are places where no light ever shines, where darkness is folded by pale hands and jewel-bright eyes, where the world is ruled by the wicked and kept by the wraiths. This is where the Sprites of the Sihl live. But Sprites are not born, they are made. On the path to Spritehood, spritelings must first become shades. They do so by binding a shadow: a woodland creature, who guides them through their training. Together, they keep from the light and learn to enchant living things, to bind them, and, eventually, to kill them.  Yet, not all spritelings are born with malice—they must earn it or they are condemned. What happens then to the spriteling who finds a shadow where she shouldn’t? What happens if that particular spriteling wasn’t born with malice at all?

Ahraia was that spriteling. She ran too close to the light and bound herself to a wolf, a more powerful shadow than any that came before it. Now a shade, her shadow marks her for greatness. But a test is coming, and the further they wander out of the darkness, the deeper they wander into danger. Ahraia’s time is coming and what awaits her at the end of her test will either make her or kill her

This is where the theme of the book and the character of Ahraia really meld. All her life she has been taught the three rules of the Shadow woods - Don't make a sound, don't touch the trees, and don't drink the water. She and Losna do the exact opposite bringing the monsters to them instead of being hunted. They attack the shad-mons showing them their lack of fear and cross unattacked through the rest of the shadow woods.

Okay, sorry that was a long synopsis. Maybe not totally necessary, but it helps me to think. Ahraia and Losna survive because they don't do everything they are told, they question orders, and learn that trying new things can work better than the old. Instead of taking life, Ahraia saves lives. Instead of fearing the day, Ahraia uses it to her advantage and finds that while it burns, it will not kill her. Instead of using animals as tools to selfish ends, Ahraia treats creatures with respect and tries to ask as little as possible. Ahraia is powerful because she does what feels right to her, not what society tells her.

I loved this book. My review cannot do it justice. The plot was complex, but everything had a place. The characters were intense and interesting. And maybe most importantly of all, this story made me feel. I was emotionally tied to the story, I cared about the characters and I was on the edge of my seat. I read it in three days, and it's a pretty long book. If you want a complex, compelling story about the trust and love between a girl and her dog, this book is for you. And if you don't want that, read it anyway. It's fantastic. 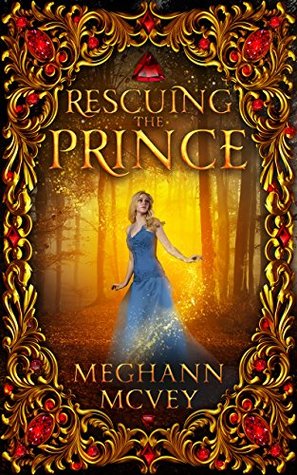 Goodreads Summary: During the afternoon fantasy parade, a dragon swooped down and carried off my boyfriend. I am not making this up.
So begins Leah’s adventures that lead her to another world. At home in California, Leah’s boyfriend Gerry is her rock and motivation. Now, trapped in another world without him, she must find her own courage. During her quest, Leah impersonates a missing princess, learns magic, and meets new friends and allies, including the shy, handsome Tolliver. But in the end, does she have what it takes to defeat Gerry’s fearsome captor, the Dragon Rider?

My thoughts:
This story was riveting. I found myself staying up late into the night to finish it. The main character - Leah, was real. She wasn't some warrior-ess just waiting to save the day. She frequently did things wrong, and was timid and full of anxiety, yet tough. Most of the characters in the story were well rounded and carefully crafted. I especially enjoyed the characters at Valeriya the school of magic, and the two guards - Tolliver and Faxon were well written too.

However, this story didn't seem very linear, it actually felt like multiple stories in one book. First, Leah is set on rescuing her boyfriend who was carried away by a dragon, but then she is caught up in the search for a missing princess and used as a fake, in order to keep the kingdom stable. After showing signs of magic, she's sent to a school where she can learn more about her new powers. Then, a civil war breaks out and she is rushed back to the first kingdom she entered. While there she finally decides to do something about her boyfriend and goes on a hunt (with a gypsy) to rescue him from the Dragon Rider.

In total about 2 years pass between the beginning of the book and the end. The main plot of the book which seems to be rescuing Ger (the boyfriend) gets lost among the more exciting things that Leah experiences during her adventure. She not only learns how to be a princess, and how to weld elements, but also falls in love with a great guy. That's a lot to cover. The plot was good, but towards the end of the book things became very confusing and events didn't seem to connect. Were we supposed to believe that Leah was fine with her boyfriend being kidnapped and probably tortured for two years? It just seemed a little improbable.

At the end Leah finally faces the Dragon Rider and learns that it is not who she thought! It is Lady Ariana the kind woman who dwells in the village, but no! Wait! It's actually Mersania last of the first people. Immortal and alone, she used to be lovers with Ger, who is actually also from this world, and also immortal. She kidnapped him as revenge. What???? If you're confused by that, so was I. Especially because during the book, Mersania's story is told multiple times, each time she is illustrated as a sad lonely child wandering the world. In one version of the story she lives with the gypsies for a time before continuing her life. At no time during any of the recitations of her tale did I feel like she was malevolent, and yet she had captured a man and held him captive for two years - yes, he was her ex-lover, but still. It seemed out of character.

At the end of the book everything wraps up, the civil war ends, the missing princess turns up (she was actually in disguise as a dude the whole time), and Leah ends up with Tolliver.

But wait! It's not over! Suddenly Leah and Tolliver are transported back to modern day California right into the amusement park (think Disneyland) where Leah used to work. Now it's over.

This book left me with more questions than answers. I'm still very confused over a few key points. 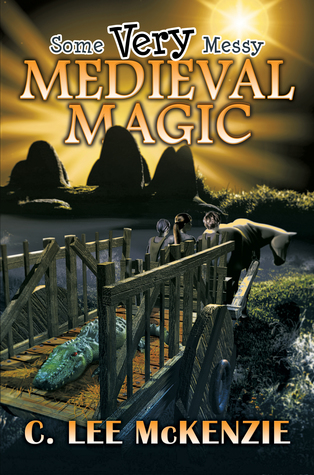 
Pete and his friend Weasel thought they’d closed the Time Lock. But a young page from medieval times, Peter of Bramwell, goes missing. His absence during a critical moment will forever alter history unless he’s found.

There’s only one solution - fledgling wizard Pete must take the page’s place. Accompanied by Weasel and Fanon, Pete’s alligator familiar, they travel to 1173 England.

But what if the page remains lost - will Pete know what to do when the critical moment arrives? Toss in a grumpy Fanon, the duke’s curious niece, a talking horse, and the Circle of Stones and Pete realizes he’s in over his young wizard head yet again...

An alligator familiar? A woefully inept young wizard? An introverted best friend? A time-traveling author who may or may not have been turned into a horse for writing something nasty about the druids?

There was nothing about C. Lee McKenzie's Some Very Messy Medieval Magic that I did not love, unless it was the fact that it eventually ended.

I haven't read the first two books in the series (now I will) but I didn't feel lost at any point. The author does a great job summing everything up concisely and entertainingly, along the way dropping hints that make me want to go back and read those first two books.

Right from the start, this book was awesome. As soon as I read the first couple of paragraphs about a substitute teacher named "Dread Wraith" making life difficult for his middle school students, I knew I'd found a good thing. The tone is so entertaining and the two main characters are so lovable.

Pete and Weasel are two eighth graders who in many ways couldn't be more different: Weasel seems to know everything - Pete is pretty clueless and at any given time you can probably find him screwing things up. Weasel puts out a grumpy, leave me alone vibe - Pete can't understand why anyone wouldn't want a hug. For better or for worse, they're best friends. And I am so in love with their friendship dynamic.

This story also has a nice element of mystery, and that coupled with the fun voice and quick pace is what kept me reading. Plus, there are delicious touches of all the things that make up a great story: mysterious standing stones, a dark forest, ghosts on Halloween night, illusive castles, time travel disasters, and even a bit of old English politics. I mean really what is there not to love?

I'll stop rhapsodizing now and try to actually talk about the book.

Pete and Weasel have to go back to medieval England to fix a time inconsistency left over from Pete's great Time Lock disaster (one of the instances in which he screwed things up). Pete knows he has to save the young duke, but he doesn't know how, when, or what from. And to make things worse, it looks like there may be an assassin in their midst.

Complicating matters still further is the fact that Weasel can't wear his glasses because glasses haven't been invented yet and he and Pete need to blend into medieval England, that Pete has no idea how to ride a horse or wield a sword, and that the druids keep interfering in everyone's affairs.

Also there's the fact that Pete's alligator familiar (?!) is 100% done with Pete after getting left in a smelly moat for several days, and the startling revelation that Pete's horse is definitely not what she seems. I can't - I just freaking love all of it.

In short, if you're looking for a fun, engaging middle grade adventure that will make you laugh out loud but also keep you up at night reading, and if you like your novels sprinkled with an element of the supernatural and a bit of time travel, you really can't go wrong with Some Very Messy Medieval Magic. And don't let that title fool you - there is nothing messy about this book. It's pure perfection.

Ah, what the heck? I'll give it five trees. YOLO.

Email ThisBlogThis!Share to TwitterShare to FacebookShare to Pinterest
Labels: Book Review, Fantasy, MG, Science Fiction
Newer Posts Older Posts Home
Subscribe to: Posts (Atom)
WE ARE CURRENTLY TAKING A HIATUS FROM NEW AUTHOR REQUESTS. PLEASE ONLY REACH OUT IF WE'VE REVIEWED FOR YOU BEFORE.