Talus and the Frozen King 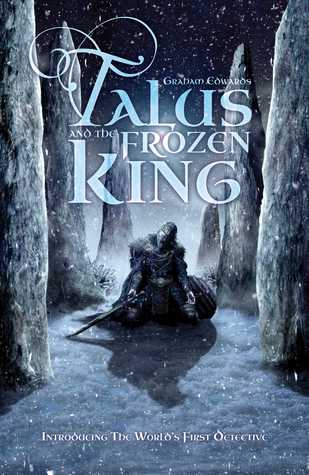 A dead warrior king frozen in winter ice. Six grieving sons, each with his own reason to kill. Two weary travelers caught up in a web of suspicion and deceit.

In a distant time long before our own, wandering bard Talus and his companion Bran journey to the island realm of Creyak, where the king has been murdered. From clues scattered among the island's mysterious barrows and stone circles, they begin their search for his killer. But do the answers lie in this world or the next?

Nobody is above suspicion, from the king's heir to the tribal shaman, from the servant woman steeped in herb-lore to the visiting warlord whose unexpected arrival throws the whole tribe into confusion. And when death strikes again, Talus and Bran realize nothing is what it seems. Creyak is place of secrets and spirits, mystery and myth. It will take a clever man indeed to unravel the truth. The kind of man this ancient world has not seen before.

My Thoughts: When I started this book I couldn't remember why I had requested it in the first place because it had been on my reading list for so long. So, I started the novel without even knowing what genre it was, and funny enough even after reading it I'm still not sure what the genre was . . . but anyway, I had an extremely open mind to this book.
Within the first chapter it became very clear to me that Talus was Sherlock Holmes. I mean, I guess I should have guessed there would be parallels since the subtitle of the book is "Introducing the world's first detective" but I really wasn't prepared for just how Holmes like Talus would be. As an avid fan of Sir Arthur Conan Doyle I have read all of the Sherlock Holmes stories and novels, and I can tell right away when my favorite detective is being described. Talus is tall and thin, he is often described as bony, but he is also inhumanly strong. Throughout the novel the story is told from Talus's point of view as such there are often references to the buzzing in Talus's head and how he sees so much more than everyone else. He never rests and is constantly jumping from clue to clue without informing his colleagues. He only has one friend - Bran, who most of the time can't stand him, he has an undeniable sense of authority about him, and he has a hard time understanding human feelings. Now I would like to describe Holmes. Holmes is tall and thin but unusually strong. His brain is never still, causing him to use opium when not on a case in order to slow his racing mind. Holmes constantly solves cases quickly, but then stays around for a while longer in order to gain the evidence to prove the verdict to the police or victims. Holmes only has one friend - Watson, who has to takes breaks from Holmes stunning and obnoxious intellect. There is a reason the police treat Holmes as a superior - he can speak quietly in a crowded room and still be heard because of the power and authority which he possesses. And have you seen Sherlock? Man does he have a hard time understanding emotions! Have I convinced you of the similarities yet?
Having said that, Bran is akin to Watson. Both the "gunmen" for their intellectual friends, these characters often have no idea what is going on, but have incredible faith in the abilities of their
"besties". Bran, like Watson, will do anything that Talus asks of him, although he often doesn't know why. At the end of the day both of these characters would rather be near their "bestie" than anywhere else. Wow Edwards, are you much of a Sherlock Holmes fan?

Now, to the plot. This story had plenty of twists and turns and I honestly didn't know who the killer was until Edwards revealed it. Wow, yeah I totally didn't see it coming. So congrats on writing a complicated story that kept it's readers on their toes. Anywhoooo . . . the story starts with Bran waking from a nightmare. Two years ago he failed to save his wife from the sea because of falling stars, one of which destroyed Keyli, and another which destroyed Bran's right arm. Bran and Talus are following the northlight; a magical green light which appears in the sky filled with spirits. There is a legend that if a man follows the light to the bitter north he will find those whom he loved and lost and have a choice to either bring them back, or join them. Bran seeks after this light to bring back Keyli, and Talus because of reasons unknown and his intense curiosity.
The action begins with Bran and Talus on a cliff which over looks a village. They're awakened by the sound of inhuman wailing. Because Talus is inexplicably drawn to strange occurrences he bounds down to the village to see if they can help. They arrive to find the king dead and frozen stiff as a board, oh, and he's naked. Within moments of examining the dead king Talus proclaims he was murdered. Talus and Bran are commanded to stay at the village until the murder case is solved, and of course, Talus takes it upon himself to solve it.
The story that follows is intense and rather violent. It's the story of an over controlling father and the results of his iron rule. This story questions if an iron peace is really peace at all.

Why only three trees? I only gave this book three trees because I'm pretty sure I only enjoyed it as much as I did because of the similarities between Holmes and Talus. I kept reading in order to see just how like Holmes he could be, and not really for the actual story. That said, it was still a good original storyline.
Posted by Anna at 6:05 PM No comments:

Email ThisBlogThis!Share to TwitterShare to FacebookShare to Pinterest
Newer Posts Older Posts Home
Subscribe to: Posts (Atom)
WE ARE CURRENTLY TAKING A HIATUS FROM NEW AUTHOR REQUESTS. PLEASE ONLY REACH OUT IF WE'VE REVIEWED FOR YOU BEFORE.