Song of Echoes is a rich, epic fantasy with a wonderful heroine 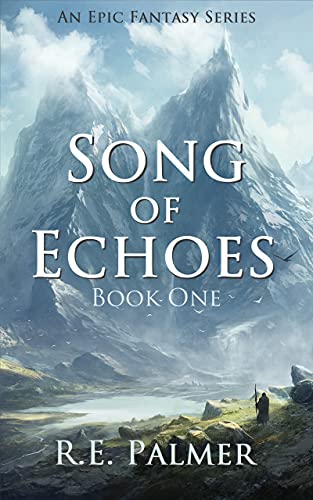 ‘All that has gone before is woven into the Song; joy, sorrow; kind acts and cruel acts; creation and destruction. Past, present, and what has yet to come, make themselves known — if you know how to listen.’For three hundred years, the people of the Five Realms have lived in relative peace, protected by their great leader, the Archon. Yet, far to the north, in the frozen lands beyond the Draegalen Trench, the Ruuk stir, driven by a rising evil, long believed banished from the world. But rumors questioning the Archon’s ability to defend the realms once more, persist.Elodi, the Lady Harlyn, uneasy in her new role following the death of her father, and Toryn, a farmworker and outsider in his village, must discover a way to fight an enemy that all but defeated their ancestors.
Song of Echoes is the first book in this epic fantasy series.

This is an exciting post because I get to review a book I beta read that is now being published!
R. E. Palmer's Song of Echoes is a rich fantasy adventure in the tradition of Prydain, Earthsea, and dare I say Middle-Earth. It strikes that balance that's hard to achieve but crucial in fantasy: beautiful world-building and a forward momentum plot. Plus it has a young, precocious hero of unknown origins (Toryn) and a fully developed heroine (Elodi) who is much more than just a "strong" female character. In other words, it has everything I want in a book.
There are three reasons I couldn't put this book down: the action, the suspense, and Elodi.
The action. There are a couple of really epic battle scenes that almost made me miss my subway stop (seriously, it was real close) because I was so engrossed. I could picture the action vividly in my head.
The suspense. By which I mean mysteries that I just had to keep reading to find out about. For example: how did Elodi's father really die? Who was Toryn's father? Who is the strange magic-worker who saves Toryn's life? Is the Archon, protector of the realm, really a good guy? Etc.
Elodi. All the characters in this book are very distinct and well-developed, and both Toryn and Elodi (the two main characters) have great arcs. Some characters I absolutely loved, others I found mysterious and intriguing, and there are others whose morality I'm still not sure about. But when all is said and done, Elodi is just the best and clearly I can't review this book without mentioning her multiple times. Picture Eowyn but as the queen of Rohan and with more inner dialogue, slowly gaining confidence in her leadership abilities.
While all of that kept me reading, the land, lore, and magic ushered me into a rich, wondrous new world I didn't want to leave. In the end, isn't that one of the best things about fantasy? There were moments that felt numinous and sublime in the way Narnia sometimes feels, and references to old tales and myths that reminded me of Tolkien's Middle-Earth. Sometimes fantasy worlds feel a little thin or lacking, but this world is rich with history, legends, creatures, peoples, and places.
All in all, a truly epic read.

Newer Post Older Post Home
Subscribe to: Post Comments (Atom)
The Wood Between the Worlds is dedicated to bringing you great book reviews. Looking for your next favorite book? Find it here. Have a book you'd like us to review? Give us a shout.