Colonization sucks and squirrels are awesome: The Ghost of Crow Cavern 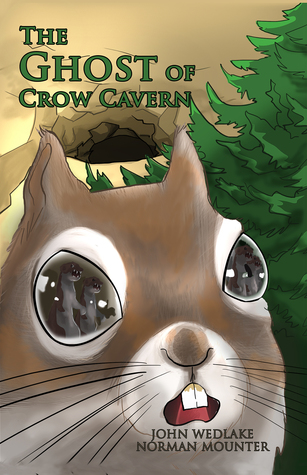 A wave of delight and anticipation sweeps through a small community of red squirrels as they behold a vast fleet of boats carrying their distant cousins towards them. They will no doubt bring incredible wealth, wisdom and joy to the humble squirrels of Nutshaven.

However, the dream soon becomes a nightmare. Their distant cousins soon turn out to be enormous and brutish bullies of an ever-expanding Grey Empire. Shadowtail - the brilliant but intensely evil Grey leader - announces that their lives are about to radically change:

“Your colony is now ours, and we shall endeavour to use you and your resources to enrichen the imperial spoils of conquest and world domination.”

With their entire way of life now under threat, will the wisdom of old Normsk, the wits of young Cheswick and the might of Brutenuts the Brave be enough to counter such a dark and dominant force?

So I'll just cut to the chase here: I freaking love The Ghost of Crow Cavern.

If we're on the subject of mice, this book could be compared to stuff like The Tale of Desperaux, The Secret of Nimh, and probably Watership Down but I haven't read that last one (yet) so that comparison is pending. (And yeah, I realize Watership Down is rabbits, not mice.)

It also has a little in common with Animal Farm in that it's a story about animals on the surface, but it has obvious political undertones. I found myself thinking about British colonization and the Holocaust--but don't let that scare you away from reading this wonderful little book. It's far from depressing; in fact, it's delightful and often hilarious.

I'm pretty sure I read 75% of this book with a huge smile on my face, and I had to restrain myself from laughing out loud at a few points because I was in public. I especially loved Shadowtail's instructions to Scug concerning finding information on the rogue squirrel Cheswick:


"Now listen up! I need to know more about this mysterious Cheswick character. Where he once lived, who his parents were, his education...and - most important of all - what kind of chess player he is."

Upon reading this, I may or may not have laughed out loud in a courtroom. (Court wasn't in session, don't worry.)

The narrative style almost gave me a Last Unicorn vibe (and if I compare any book to The Last Unicorn, you better believe I loved it). We aren't told who the narrator is, but he or she clearly knows how the whole story will play out from beginning to end, and throws in comments of a historical bent.


"A squirrel by the name of Maria Dumplekin - who has since passed into legend - was gazing out from atop a tall forest tree. It was here that she caught sight of a curious cluster of glistening specks upon the distant horizon."

There are also just some random things thrown in (as in The Last Unicorn) which add an element of delight and hint at other worlds outside that of the story. Like when the narrator talks about the Cerebri squirrels who have incredibly large brains and build sophisticated machines. And we jump between characters in a way that's fun but doesn't make the reader seasick.

Having said that, I did get briefly lost in the first few pages as we switched between characters a few too many times in too few pages, especially considering that the story and setting themselves hadn't really been established yet.

Now here's my only real ask for this story:

The pacing is seamless and the story moves quickly--maybe a little too quickly: I read it in two hours.

I can just imagine the conversations between Normsk and Cheswick as they hide out on the edge of Nutshaven and debate whether to intercede now or wait a little longer, as they discuss the devastation the grey squirrels have inflicted and wonder whether there's any chance of victory. And as they wonder whether, if and when they manage to save Nutshaven, there will be anything left to save.

I can just picture little Blossomtail and Felix and the other squirrel pups in their brainwashing lessons, struggling to make sense of what they're being told and deciding whether or not to believe it. I can see Blossomtail saying something wrong and Violet bravely defending her in front of the fearsome Auntie Gerta. I can picture a few of the little squirrel pups starting to succumb to Shadowtail's lessons, and a few others withstanding, maybe even forming a secret Dumbledore's Army-esque society.

Then, of course, there's Shadowtail himself, who is a fascinating character. I'm envisioning him pitted as Cheswick's foil: the two squirrels holding down opposite ends of the story yet sometimes acting in surprisingly similar ways.

Various stories--each starring a different set of protagonists and antagonists--taking place simultaneously across weeks (maybe months, who knows?) until they all collide in a heart-stalling climax. Imagine the epicness!!!

(Of course, I'm not the author(s) and I'm not going to presume to tell them how to write their own book. It doesn't need to follow the script I've outlined above; in fact, a longer rewrite of this book by Norman Mounter and John Wedlake would probably be way awesomer than anything I could think up.)

See, the thing is, I loved this book a lot. But just as I realized how deeply I'd fallen in love, it was over.

If this were a longer book that I could really sink my teeth into, I can imagine myself pouring over it for days, reading up late into the night, shirking errands and foregoing food and sleep to find out what will happen to the squirrels of Nutshaven. Upon finishing, I might add this book to the collection of my most cherished volumes, recommend it to everyone, and save it on my shelf to re-read in a few years.

And I'm aware that there's a sequel in the works (or at least, the epilogue def sets us up for that), but I'd rather have a meatier first novel before/in lieu of a sequel.

There's a lot to ponder in this book, and I'm still not entirely sure whether it's just a story or whether it's meant to be a political fable of sorts. I think if I'd had more time to digest it, I wouldn't feel so much like I'd just jumped off a roller coaster. (Though my post-book vertigo is a testament to just how powerfully this story took me for a ride.)

Long story short, I dig it. I just want more to love.

*Reepicheep is basically my all-time favorite character so I'll take him over a squirrel any day and now feel terrible for dissing his tail. Also why is this review so long? Wow I guess I had a lot to say.

Email ThisBlogThis!Share to TwitterShare to FacebookShare to Pinterest
Labels: Book Review, Fantasy, YA