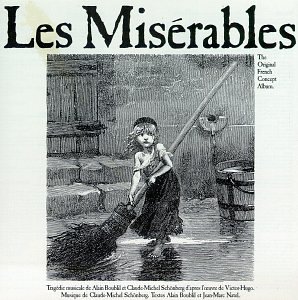 Most people don't know that the musical Les Misérables was originally going to be in French. In fact, the writers, Alain Boublil and Claude-Michel Schönberg (both of whom are French) created an entire concept album in French before the producer Cameron Mackintosh asked them to turn it into a musical in the English language. And the product of that conversation is the musical we know today as Les Misérables, one of the most popular and longest running musicals in the history of theatre.

For example, the song that takes the place of "Castle on a Cloud," entitled "My Prince is on the Way," is absolutely beautiful and in some ways preferable to the current one, and the song that introduces us to M. Thenardier, "The Inkeeper's Motto," is, unlike "Master of the House," entirely appropriate. "À la Volonté du Peuple" (translated as "To the Will of the People"), replaces "Do You Hear the People Sing" with the same melody and more poetic lyrics. One scene in the concept album that I definitely prefer to the parallel scene in the current musical is Gavroche's death. But the song that takes the place of the current "Red and Black" is rather disappointing (it's just Marius soloing), and while the song that Eponine sings instead of "On My Own" is lovely, it doesn't hold a candle to the current showstopper.

The second track in the concept album is titled, "L'Air de la Misére," or "The Air of Misery," and is sung by Fantine to the tune of "Come to Me" and "On My Own":


OK, so I know you probably don't speak French (unless you do), but even so, you can probably tell that the two songs are echoing each other significantly. Both songs have the same melody and the same structure, and they use many of the same words and sentence structures. Let me give you an English translation so you can see the similarities more clearly. Here is Fantine's "Air of Misery":

Misery is the mother of no one

Misery is nevertheless sister of men

But no one on earth wants for a daughter

A bastard born in a dungeon of the Bastille

Plenty of vices and all weaknesses

Misery looses the beast in man

And the little bird then into a stray dog transforms.

The light is in the heart of men

But it will stop burning for no one

Love each other to vanquish the shadows

As long as there is everywhere

The light, on the morning of justice,

Can finally decapitate our vices

In a world where God could be pleased

If He decided one day to redescend to the earth.


You can see the echoes of Fantine's ballad in the first two lines of Valjean's song: "The light is in the heart of men / But it will stop burning for no one," echoes Fantine's "Misery is the mother of no one / Misery is nevertheless sister of men." Both singers take a subject - Misery or Light - and assign it to the human race, using the words "men" ("les hommes"), or "no one" ("personne"), at the end of each sentence. Moreover, both Fantine and Valjean refer to the vices of men, but while Fantine speaks only of their birth and existence in the world, Valjean reveals that love will one day destroy the vices created by misery. Fantine ends her song by lamenting man's transformation into a beast, but Valjean ends his song with the hope that man can someday transform into a more perfect and God-like being. Fantine's song reflects the uttermost depths of squalor and misery, but Valjean's song comes at the end of his life reflecting love, peace, and transcendence. As I read and listened to Valjean's final revelation, I couldn't help but think of my favorite quote from the novel Les Misérables: "To love or to have loved, that is enough. Ask nothing further. There is no other pearl to be found in the dark folds of life. To love is a consummation" (Hugo 1382). I find this quote echoed nicely in Valjean's song about "The Light."

If you're still here and haven't yet revolted over the length of this post and all the French text in it, I'd like to share one more song from the concept album with you. Here is (slightly shortened) the French text of "To the Will of the People," sung to the tune of "Do You Hear the People Sing" - side by side with an English translation:


Well, I don't really have anything to say after that. If you want to check out the full text of the French concept album (plus an English translation) you can go to this website: http://www.placedauphine.net/translations/ofc.html

Then, if you'd like to hear the full French concept album, you can head over to this playlist on YouTube: http://www.youtube.com/playlist?list=PLE4A332CE9F807D86

If you'd like to read more of my thoughts on Les Misérables and you haven't yet read my review of the novel by Victor Hugo, you can check that out here: http://woodbtwntheworlds.blogspot.com/2014/02/keep-calm-and-love-on-les-miserables.html